JTA: the problem of permanent employment 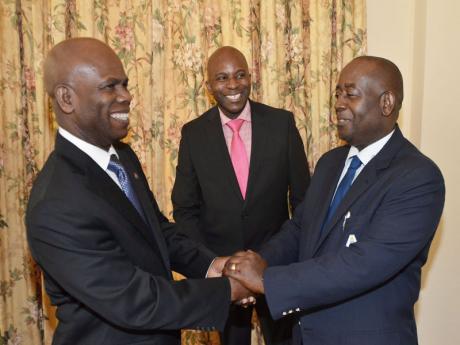 Custos of Kingston, Steadman Fuller (left), is greeted by president-elect of the JTA, Doran Dixon, while current president, Dr Mark Nicely, looks on during Read Across Jamaica Day on May 6. Dixon and Nicely have both been lambasted for provocative directives to the teacher union's more than 22,000 members. - JIS

Any doubt that the Jamaica Teachers' Association (JTA) has lost its way and has become an unaccountable and maverick organisation has been utterly removed. The strategy of taking a reasonable approach in the matters relating to the education of Jamaica's children has been abandoned by the JTA. Most of the public comments coming from the leadership of JTA have been full of vitriol and lacking in reasonableness.

The most recent comment by Dr Mark Nicely, president of the JTA, is the most egregious of all. Speaking at a meeting at the JTA's headquarters in Kingston on Wednesday, Dr Nicely said educators were to "proceed (ignore the master book list provided by the Ministry of Education (MOE)) until apprehended" and then the association would step in to defend them.

The background to this statement is that the MOE, in response to the concerns of parents has developed a master book list. As I understand it, the master list includes a variety of works that have been written along the lines of the curriculum in the public education system. This list is so structured that parents of children in the primary-school system can purchase their list of books for under J$5,000 and, similarly, parents of children in the secondary-school system can make their purchases at a cost of J$12,000.

This is a good development in two respects. The first is that it addresses the concerns of parents who have serious issues with affordability of the books on the supplemental reading lists given to their children. It must be borne in mind that textbooks for children in the primary education system are provided by the MOE free of cost. Textbooks for children in the secondary school system are available through book rentals. The master list refers to the material for supplemental reading.

The second is, assuming that the list has been compiled with the aid of curriculum-development specialists and includes the input of teachers, it means that not just the expensiveness but also the randomness (and I might add the risk of nepotism) with which parents have been confronted over the years can now be beyond us.

A more accountable teachers' organisation would have insisted on the development of a mechanism in which the union would be able to play the part required by its considerable experience and expertise in upgrading such master lists from time to time.

Instead, Dr Nicely has made a statement that is full of arrogance and contempt for the needs and concerns of parents, let alone our children. It is not difficult to figure out the reason for the unaccountable and maverick approach of the JTA in this matter. It is consistent with the attitude shown by members of the JTA leadership who have made disparaging remarks publicly against the minister of education.

It is also consistent with the position taken by the JTA on the transfer of teachers from schools that are overstaffed to ones that are understaffed.

Still more, it is consistent with the approach of the JTA to the matter of the underperformance of schools. In 125 surveyed secondary schools in the public education system, only 30 per cent of their students had passes in five CSEC subjects, including mathematics and English. If this matter concerns the JTA, its leaders have hardly ever spoken about it publicly. In fact, the JTA has stoutly resisted any attempts to hold their members accountable to performance standards.

However, it is not the JTA that we must blame for its unaccountability; we must blame ourselves for making it unaccountable. The problem is the idea of permanent employment. As it is becoming increasingly clear in Jamaica these days, to fire a teacher literally requires an amendment to the Jamaican Constitution. The sanctity of their employment contract, no matter how egregious the breach by the teacher, is now a matter of record. The record is clear: You cannot fire a teacher in Jamaica.

In fact, it is becoming increasingly the case in Jamaica that you cannot fire anyone in the public sector.

The trade unions, of which the JTA is among the largest and most intransigent, the Ministry of Labour, the Industrial Disputes Tribunal and even the courts in Jamaica are conspiring to give the impression that to keep one's job, even if one has stolen from one's employer, is a human right. Every time persons are dismissed in Jamaica, the review tribunal gives them back their job. I cannot remember, in recent times, a single case of a dismissed employee that was not reinstated. The JTA is permanent employment gone mad.

The way to recover some accountability in the JTA and among members of the teacher profession is to review the terms of employment and make it easier for teachers to be fired. As long as there is permanent employment of teachers as a matter of law, and there are union dues to be collected (hundreds of millions of which disappear without a trace), the JTA will remain maverick and unaccountable.

Garnett Roper is president of the Jamaica Theological Seminary. Email feedback to columns@gleanerjm.com and garnettroper@hotmail.com.