Peter Tosh joins the world to the sounds of American blues 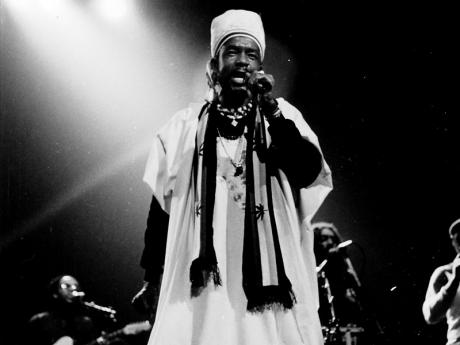 Peter Tosh, one of the 2013 International Reggae Day honourees.

Winston Hubert McIntosh more popularly known as Peter Tosh was born on October 19, 1944. Having moved to Trench Town as a teen where he met Bob Marley and Bunny Wailer, Tosh quickly rose to fame as part of the reggae band, The Wailers. He embarked on a solo career in the 1970s with his debut single, Legalise It.

Though he would go on to become a bonafide icon, making numerous hits of his own, on the day Tosh was born, the sounds of reggae were far away, with the Daily Gleaner of October 19, 1944 reporting Etta James' mega hit At Last, Bing Crosby's San Fernando Valley, Frank Sinatra's Sunday, Monday or Always and Lena Horne's Stormy Weather, the hits Jamaicans were rocking to.

Decca Records were on sale at Sinclairs located on King Street in downtown Kingston. Available were recordings of the songs Shoo-Shoo Baby by the Andrews Sisters and Gene Autry's I Hang My Head and Cry among others.

Films popular at the time were Hawk of the Wildeness, Tornado in the Saddle, This Gun for Hire and Lassie Come Home starring Roddy McDowell.

The Springfield Club in East Kingston was a popular dance spot in that era. There was no cover charge to 'dine and dance' and entertainment came by the way of live orchestra.