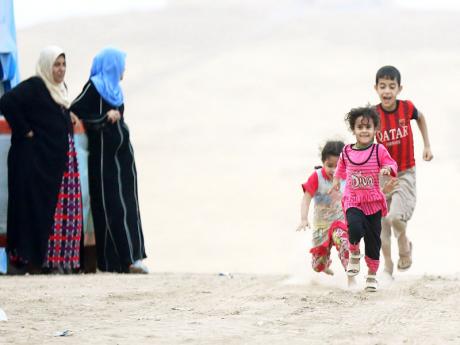 Iraqi refugee children play at Khazir refugee camp outside Irbil, 217 miles north of Baghdad, Iraq, last Thursday. The Islamic State of Iraq and the Levant, the al-Qaida breakaway group, took over much of Mosul in Iraq and then swept into the city of Tikrit further south. - AP

The Iraqi army will have to destroy Mosul in order to save it - and it's not clear whether it can do the job even then. It isn't so much an army as a vast system of patronage providing employment of a sort for 900,000 people. When fewer than a thousand ISIS jihadis fought their way into Mosul, Iraq's second city, over the past few days, most of the government's soldiers just shed their uniforms and fled.

The government troops never felt comfortable in Mosul anyway, for they are mostly Shia Muslims and the vast majority of Mosul's 1.8 million residents are Sunni. (Or maybe it's only 1.3 million people now, for up to 500,000 of the city's residents are reported to be fleeing the triumphant jihadis: Shias, non-Muslim minorities and even Kurdish Sunnis have faced execution in other areas that have fallen under the control of ISIS.)

The Islamic State of Iraq and al-Sham (an Arabic word that can mean the entire Levant, including Syria, Lebanon, Jordan and Palestine) began as 'al-Qaida in Iraq' during the American occupation, but it's the Syrian civil war that turned it into a regional threat.

ISIS actually spent more time fighting other rebel forces in Syria than the Assad regime, but it gained recruits from all the Sunni Arab countries just by being on the right side. It also got access to the money and arms that were flowing into Syria for the anti-government forces. In the past two years, it has established effective control over most of sparsely populated eastern Syria, and it started moving back into western Iraq in force late last year.

In January, it seized the city of Fallujah in Anbar province, only 100km (60 miles) west of Baghdad, and the Iraqi army was unable to retake the city although it had suffered about 5,000 casualties, including 1,000 killed, by the end of April. But at least it stood and fought in Anbar. In Mosul last Monday, the army just ran.

It ran although it outnumbered the ISIS fighters who attacked the city by at least15-1, and it may not be willing to fight very hard to take it back. The entire Iraqi government is an "institutionalised kleptocracy", as one of Prime Minister Nuri al-Maliki's own ministers said, and the army is no exception. Soldiers who go unpaid because their officers stole their wages are rarely willing to die for them.

The only real fighting force left in Iraq is the Peshmerga, the army of the Kurdistan Regional Government (KRG). It is a tough, well-armed force, but it serves what is a separate state in all but name. It apparently still holds the part of Mosul east of the river Tigris, which has a large Kurdish population, but it may not be willing to take the large number of casualties that would be involved in street fighting to recover the main part of the city.

At a minimum, the KRG would want the Baghdad government to make major concessions on the revenue and oil-exporting disputes that have poisoned its relations with the federal government before it commits its forces to a major offensive against ISIS. Or it may just decide to stand on the defensive in the Kurdish-majority territory it now holds, and use the crisis to move even closer to its ultimate goal of an independent Kurdistan.

ISIS has sent the occasional suicide bomber into Kurdistan, but it realises that its main fight is not with the Kurds. Having taken most of Mosul, its forces are advancing not east into Kurdistan, but south through Tikrit (which fell last Wednesday) towards Baghdad. It will not try to take Baghdad itself, most of whose seven million people are Shia, but by the end of this month it could end up in control of most of western and northern Iraq.

At this point, the old Iraq-Syria border would disappear and the Islamic State of Iraq and al-Sham would become a reality, extending 400km from Mosul and Fallujah in Iraq to Deir-es-Zor, Raqqa and near Aleppo in Syria. It would be mostly desert and it would control only about five million people and almost no oil, but it would be ruled by an Islamist organisation so extreme that it has even been disowned by al-Qaida.

The remaining bits of the new regional map would be the western half of Syria, still largely under the control of the Assad regime; the semi-independent state of Kurdistan; and the densely populated, Shia-majority core of Iraq between Baghdad and Basra, hard up against the border with Shia Iran. None of this is yet inevitable yet, of course. It's a war, and wars can take unexpected turns. But it's certainly a possibility.

It's also a possibility that the war could get wider, as Iran, Saudi Arabia and Turkey all consider whether they need to intervene militarily to protect their own interests. But that's unlikely to happen this month. Later is anybody's guess.

Gwynne Dyer is an independent journalist whose articles on world affairs are published in 45 countries. Email feedback to columns@gleanerjm.com.