Methinks the professor protests too much 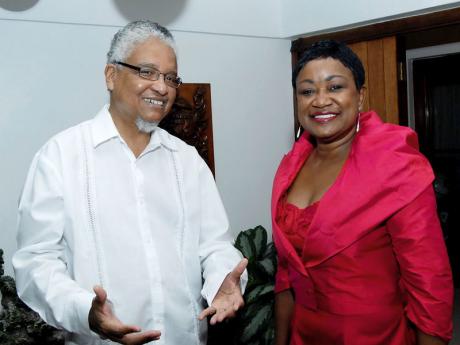 "The issue of the UWI's termination of ... Professor Brendan Bain isn't about academic freedom. ... It's not even about whether the statement in Bain's court testimony was true ... . At the core, it's about a programme leader publicly undermining the very programme and principles he was mandated to support. By his words and action, he voluntarily aligned himself with, and gave endorsement to, a diametrically opposed, unacceptable message on an issue of grave import for the UWI."

[GR: The only appropriate reaction could test The Gleaner's conservative resolve to the limit.

Oops, sorry, I forgot this is a family paper. What I really meant to say was, "BUMCT!"

He disagreed with UWI on an important issue. Unacceptable. Off with his head! BTW, what's the evidence the CHART programme was undermined?]

"The essence of the harm ... is the fact that an authoritative leader of the UWI [Who dat? Bain's opponents described him as a "retired" UWI professor on a contract. Yet, when it suits argument manufacturers, he's "an authoritative leader of the UWI"] spoke with one voice with a litigant whose purpose and objectives are in direct conflict with the policies of CHART and the UWI.

[WHICH POLICIES? Name them and the source document. Neither organisation has any formalised policy relating to buggery laws.]

"Consequently, the testimony ... became associated with UWI [How? Because he's (not) "an authoritative leader of the UWI"? This gross non sequitur flies in the face of Bain's explicit dissociation of his evidence from UWI] in deeply negative ... ways, placing question marks on UWI's integrity [Rot! It was INDEPENDENT expert testimony] and on its public commitment, not only to progressive notions of public health ... , but more fundamentally, to non-discrimination, equal opportunity, justice and human rights.

[RUBBISH! Bain expressly protected UWI from any such reaction. Buggery laws are supported by a Caribbean majority. These self-styled "progressive notions" are minority views. What about UWI's commitment to public discourse?]

"... The elimination of discrimination [against] sexual orientation is a key ingredient of UWI's HIV programming, which Professor Bain [led] for many years and about which he testified. Anti-discrimination training is a vital part of CHART's programme, as conceded in the expert testimony. ["conceded"? Prof Bain's record "for many years" hasn't a whiff of discrimination about it. Why's evidence that MSM are high risk "discrimination" instead of "truth"?]

"... The mandate of PEPFAR and the Global Fund for AIDS, which funds CHART, is 'to develop programmes aimed at reducing HIV-related stigma'. [Assuming this implied non sequitur that funders' objects must be CHART's objects, how come, after decades of CHART's successful pursuit of ITS objects without bias or stigma, Bain's expert testimony suddenly makes this more difficult to attain?]

"... An important aspect of [seminar] discussions and recommendations has been the need to eliminate discrimination and stigma as a result of sexual identity ... . This enlightened position has ... become part of UWI's core values. [It's part of all enlightened person's core values. So what? How does expert testimony about an established public health risk cause increased discrimination or stigma? Addressing public health concerns can NEVER be "discrimination"]

"Professor Bain's long-standing excellent work on HIV and public health is without question."[There it is again. IT'S HIS EXPRESSIONS that are objectionable.] Ironically, it's precisely because of his high profile that his remarks and chosen association are so damaging to UWI's reputation and credibility. [Obviously, it's paramount to maintain the pretence that Bain's disclaimer never happened, so opponents can argue he spoke for UWI. He obviously didn't. Why so important to create a contrary impression?]

"The retention of Professor Bain in such circumstances threatened to destroy much of the hard-fought gains and trust UWI won in the fight against the scourge of HIV ... . [CRAP! It offended some powerful lobbyists of some powerful funders. Nothing more.]

"In this context, such testimony cannot be viewed as a mere personal viewpoint, isolated and insulated from CHART and UWI's policy position. [Yet another flawed attempt to ignore Prof Bain's disclaimer. Nowhere is the disclaimer addressed directly by Prof Antoine. Bain explicitly said it was a personal viewpoint. Does everything else he said count but that?]

"... The very reason authorities like Professor Bain are called upon to speak is ... their professional capacity, which is inextricably linked with the institution ... . [Foolishness. Experts are called for their personal expertise. How many ways is Antoine going to attack Bain's disclaimer without acknowledging its existence?]

"... While intellectual freedom is to be protected and encouraged, UWI has a duty to ensure that ... where it holds itself up as perpetuating a particular policy for the benefit of the community, persons ... chosen to take the lead on the matter are demonstrably in accord with that policy ... . [What "policy"? To provide the best education, health care and health-care training? That policy? Or is there an invisible policy always to pander to sponsors, no matter what? SHOW ME THE POLICY!]

"The bottom line is: Having given this testimony, it'd be impossible for this community, the very constituency he's supposed to serve, ever to trust Professor Bain again. [Serve who? He serves a training programme to reduce HIV/AIDS, NOT any sponsor, or, worse, group-lobbying sponsors. There's a dangerous, self-destructive innuendo running throughout this stupid argument that implies only the gay community suffers from HIV/AIDS. Otherwise, why is Bain constantly told he "serves" the gay community when he actually serves the fight against HIV/AIDS?] Thus, UWI had no choice but to change the leadership of CHART."

UWI HAD A CHOICE

[Yes, it had a choice. UWI could've honoured Jamaica's Constitution by "respecting and upholding" Bain's right to freedom of expression, conscience and speech. That's the platform upon which it could fend off outside lobbyists' bully tactics.]

This is the perspective of a lawyer? Not just any lawyer, but a law faculty dean? Bumct! Now I understand why it's said that those who can, do; those who can't, teach.

Unlike Prof Antoine's convoluted, irrational reasons for Bain's dismissal, UWI expressed only ONE:

"While the university recognises [Professor Bain's] right to provide expert testimony in the manner he did, ... Professor Bain has lost the confidence and support of ... the community which [CHART] is expected to reach ... . It's for this reason (my emphasis) ... UWI decided to terminate [his] contract."

Prostitutes have an HIV/AIDS bonus exchange programme with their customers. Doctors, including Prof Bain, treat HIV/AIDS-infected prostitutes all the time without discrimination or stigma. Does this mean Bain MUST support the decriminalisation of prostitution? Or is the REAL TRUTH that prostitutes don't have as rich or powerful a lobby as the LGBT sector to make prostitutes a "community ... CHART ... is expected to reach ... ."

If the Caribbean's most powerful academic institution won't uphold academic freedom against pusillanimous pressure from puerile petitioners, what price your freedom of speech if YOUR employer is beholden to such a petty group? Lord, deliver us.