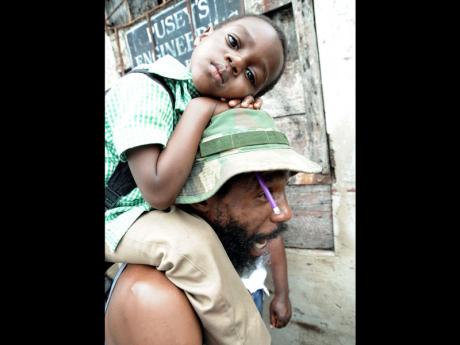 Rudolph Foster heads home with his son, Danziel, along North Street in Kingston on March 20, 2013. - File

The turn line for Imani Duncan-Price’s column published last week inadvertently misdirected readers to the continuation of another Father’s Day-related article by Orville Taylor and may have confused readers. We apologise for the error. Today(June 22. 2014), we republish Imani’s column in the online edition of In Focus.

Jamaica needs to redefine the limiting roles, responsibilities and expectations of women and men in relation to each other. As we concentrate on fathers today, redefining these roles can free up men to be nurturing active dads involved in everyday parenting - everyone can hug, everyone can change a diaper, everyone can reason with their child and really listen to them. Let us redefine these roles for Jamaica's collective benefit.

Mothers, let's welcome the presence of all the fathers for our children, even if they don't have presents or 'a smalls'. Their time, attention and care are valuable for the personal development of our children. Our limiting expectations come out of our history and patriarchy.

Patriarchy is not code for or against men, and does not refer to any individual or collection of men - and indeed in Jamaica, this system seems to live side by side with some elements of a matrifocal structure. Patriarchy references a society where men and women have relations in the context of male power and privilege. It encompasses the organisation of social systems, practices and structures (home, work, churches, political parties, parliaments) in which both men and women live and work.

The patriarchal system of slavery endowed the planter/master with the right to dominate and rule over the weak and to maintain that power through psychological terrorism and violence. It had at its economic core slave labour and often utilised strong males as 'studs' to produce the human capital needed to work the plantations. Children conceived in this way invariably stayed with their mothers and grandmothers for as long as possible - but with no or little emotional connection between the father and child established or sustained. The peculiarity of slavery in Jamaica destroyed the family structure.

One hundred and two years after Emancipation, Thomas Simey, a welfare worker, said that one of the main problems of slavery and its impact on the Jamaican society was that "families were loose and children were fatherless, and they relied on the mother primarily". This spurred Lady Huggins, wife of the governor of Jamaica in the 1940s, to propose the mass-marriage movement which sought to marry off cohabiting couples. This failed to gain traction with the majority of Jamaicans.

Today, 45 per cent of the households in Jamaica are female-headed and are larger than the national average, as well as larger than those headed by males. Yet despite this, a UNICEF assessment in 2000 indicated that about half of all children in Jamaica under the age of six live with their fathers and that four out of five fathers

support their children financially (even if nominally). So though we may have a way to go, on Father's Day today, I believe we have reason to celebrate the many fathers who are caring their children (and in some cases to their spouse's children who are not their own) and doing their best to live up to their financial responsibilities.

The antecedents of slavery are compounded by the resilient patriarchal system that we all live in - women and men, boys and girls. It affects everyone differently in terms of roles, responsibilities and expectations and consequently

These historical role patterns were
also reflected in the 1993 Report on the Contribution of
Caribbean Men to the Family by Brown, Anderson and Chevannes
that stated:

1. Mothers - not fathers - are
the main socialising agents for both male and female children,
regardless of the structure of the family, regardless also of the type
of marital union;

2. Fathers or
father figures tend to be marginal in the day-to-day relationships of
the household but are not entirely
absent;

4. The
economic factor being central to the concept of fatherhood, the status
of males as husbands and fathers is ultimately determined by it. The
poorer and more materially deprived men are, the greater their
marginality, and the greater also the role of women. Conversely, where
men are better off, they are more active as sources of patriarchal
authority over spouse and
children.

Certainly, these traditional roles
so constructed and perpetuated have not effectively served our
families, our communities, or our country. They limit the engagement and
partnership potential of fathers, especially as the nature of the
modern economic times necessitates two incomes to support the goals and
dreams parents have for their children.

Further, the
same fundamental power dynamics of patriarchy that limit the role of
fathers also drives the contemptuous attitudes and offensive behaviours
towards women, often manifesting in abuse - verbal, physical, sexual and
otherwise - in action and cultural forms such as some of our
music.

In addition, the oversexualised positioning and
commodification of women impact our mothers, sisters and daughters. How
people view women and how women view themselves also emerge from the
power dynamics of patriarchy, which we all know is supported by many
men, women, mothers and fathers. Do we, as parents, want to perpetuate
this?

This patriarchal system also harms men by
defining masculinities in Jamaica in ways that leave our men emotionally
unexpressive, that drive some men, fathers and boys into risky
antisocial and dangerous behaviours and to, in many ways, devalue
education in favour of the quick dollar, for example, and hurt their
families and society.

As we celebrate Father's Day
another way, let's be conscious as men and women in every action we take
and every word we speak. Let's therefore commit to creating a society
where men and women have meaningful partnerships and share as equally as
possible the roles and responsibilities critical to the sustainability
of families within the household, the fundamental unit of
society.

Imani Duncan-Price is a government senator.
Email feedback to columns@gleanerjm.com.