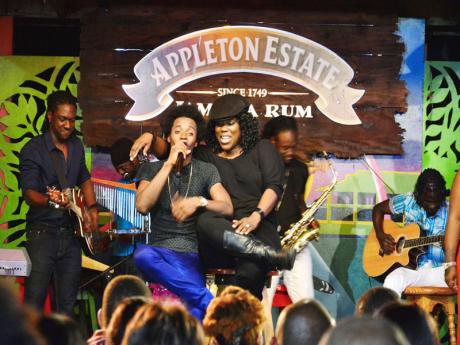 Fortuitously, I attended a performance by Romain Virgo last Monday night (June 9). I would say happenstance, as my wife and I normally attend the '2-for-1' Palace Amusement movie special on Monday nights. But we were specially invited by our good friend, Sheron Gilzean, of Covenant Insurance Brokers, to this invitation-only event just the day before.

I am not in the hip circle that is up on all things entertainment. But I had been aware of Romain being the youngest winner of the Digicel Rising Stars competition in 2007 and had had a number of hits, including Caan Sleep, Wanna Go Home, and Live Mi Life.

I was further cognisant of him performing on various stage shows locally and overseas. I was not aware, however, of the maturity he brings to the stage. From he launched into his opening Peter Tosh piece (Creation) to his popular reggae-fied version of Adele's Don't You Remember, Virgo had the audience going.

This acoustic performance event which was produced by Sutania Williams, and recorded by RETV (Real Jamaican Television), to be shown later this evening @ 6 pm, is just one of a series of last-Monday (normally)-in-each-month stagings of Unplugged at Countryside, that quaint setting that is truly 'an oasis in the city'.

Now, I have not gone to a stage show in years, the last time being the Thursday night of Jazz & Blues a few years ago when Anita Baker performed, as I had been continuously let down and disillusioned by the quality of the presentations. Romain Virgo definitely did not disappoint (nor did Anita). In fact, he was flawless to a point. His command of the stage, his engagement of the audience, his repertoire, his excellent control and his ease framed his voice to the utmost.

He performed more than 25 songs. Romain was best when singing his nuanced version of 'foreign' songs, such as Soul Provider and Don't You Remember. He was particularly delightful when singing the current hit, Stay with Me (Sam Smith) with his beautiful back-up singers providing the chorus.

He performed for more than 90 minutes and even came back for two encore songs demanded by the audience. With perspiration pouring down his face on this humid night under the floodlights, he didn't hold back.

Virgo showed his Edna Manley experience when he effortlessly worked the audience and singled out a lady, Dorothy Russell-Clarke, to whom he sang his Rich in Love. And when he introduced his supporting musicians (piano - Gregory Palmer, 1st guitar - Elton Brown, 2nd guitar - Dario Morgan, bass guitar - Kino Newby, saxophone - Conrad Pinnock, percussion - Robert Malcolm, and back-up singers, Raquel Hinds and Karen Brown), he showed he was the consummate showman.

Even after a non-stop, sweat-filled show, I was surprised when he accepted the accolades of the audience to do his encore Can't You See and Let's Get it On.

When I was in Junior B at Campion Hall Prep School in 1960, I distinctly remember a Chinese boy who was a year behind me in Junior A. He was shy and withdrawn, so shy that I cannot remember him ever speaking.

I can't recall ever knowing his name. But this memory has always stuck in my head as an example of frugality and making do with whatever you have. An example that most of us have to follow in the Jamaica of today, at least sometimes.

"De police dem shot him bradda and kill him. Him was innocent. Him was the only one of all de bradda dem dat wasn't inna de gun ting." She said it so matter-of-factly. As if is so life go inna the ghetto. She had a baby for one of the 'braddas'.

One Friday recently, she texted, "Dem just kill a man dung yeh. And de police dem block off de road." "Him was in a wheelchair and him was so nice and friendly," she bemoaned.

The following Sunday, I was reading an article headlined 'Jitters in Jungle - Heat mounts in Arnett Gardens as residents accuse cops of murder' in this newspaper. Halfway through, it dawned upon me that the "nice and friendly" man in a wheelchair she was referring to was David 'Tashi' McGrower.

The article states:  McGrower was the reputed leader of the feared Rat Bat gang, which operates out of sections of Arnett Gardens, popularly known as Jungle.

Now, I am certain that she is not alone in her thinking of who she regards as a 'nice and friendly' person, which is symptomatic of one of the problems law enforcement faces daily in dealing with community cooperation in the fight against crime and violence.

Egerton Chang is a businessman. Email feedback to columns@gleanerjm.com ail.com.