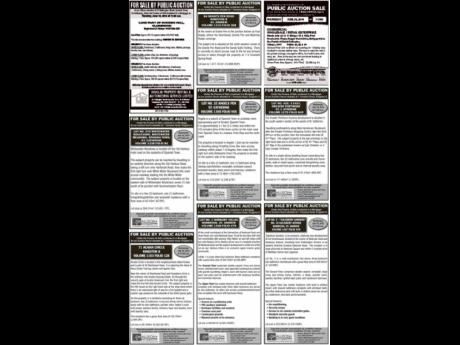 More and more Jamaicans are finding their dream homes placed on the auction block as the harsh economic climate caused many to default on their mortgage payments.

According to the National Housing Trust (NHT), the increase in the number of mortgagors who are defaulting on their loans is linked to poor earnings and the loss of jobs.

Several auctioneers have also linked the increase in the number of defaults to the slide in the value of the Jamaican dollar, higher interest rates and workers losing their jobs.

Last week, the NHT told The Sunday Gleaner that in April it had 13,824 mortgage loan accounts in arrears. This was up from 12,638 accounts in arrears one year earlier. The Trust said the value of arrears was $1.5 billion in April.

In the meantime, local building societies, which take second place in the mortgage market, also registered a non-performing loan portfolio of $6.2 billion, or 6.4 per cent of total loans in April.

Speaking on condition of anonymity, a spokesperson with a local building society told The Sunday Gleaner that while they have registered an increase in the number of properties being put up for auction, they remain behind the commercial banks, which have a higher delinquency rate of their mortgage loans.

"We have a lower foreclosure rate, way lower than the bank. It is half the rate of the bank. We have held seminars where this thing came up and we discussed it openly. It is the banks that are doing it, not us. We do foreclose, but not at the same rate," said the source.

"We intervene early. It seems the bank's mechanisms for early intervention do not work as well, " said the source.

Data from the banks were not available at press time, but auctioneers confirmed the increase in the number of properties being put up for auction.

Wallace said the properties are from local financial institutions on whose loans mortgage holders have defaulted.

Last Tuesday, 38 properties were advertised for auction in The Gleaner, with Scott Realty listing 36 of them.

"We have lots in the range of $3.5 million upwards, and houses valued from as low as $6 million to $52 million," said Wallace .

"They (the mortgage holders) can't pay because of the dollar and the interest rates. Some of them are losing their jobs as well," added Wallace as she sought to explain the reason for the increase in the number of properties being placed on the auction block.

1. They are not earning enough to take care of everyday domestic needs, as well as a mortgage.

4. Illness of the primary borrower.