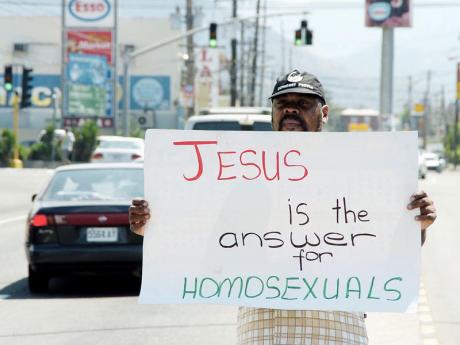 Pastor Donald Stewart staging a one man protest outside the Sovereign Centre, St Andrew, against the showing of the homosexual movie, 'Brokeback Mountain' in 2006. - File

Gay Star News, a United Kingdom-based tabloid dedicated to providing information to members of the lesbian, gay, bisexual and transgender (LGBT) community, has apologised to Jamaican pastor Donald Stewart, and paid damages for defamation after it accused him of being a paedophile.

The newspaper has run an apology stating that: "On 25 August 2013 we published an article and a photo of Dr Donald Stewart with the headline 'Demonologist pastor says 'homosexual issue' needs to be corrected'.

The article had alleged that Dr Stewart was a paedophile who had been convicted of two counts of indecent assault on a child as part of his role supervising the Swift Purcell Boys Home, Jamaica, in 2009.

But in its apology the newspaper said: "Dr Donald Stewart, pastor of the Portmore Lane Covenant Community Church, Jamaica, is entirely innocent of these charges and has never been arrested or charged in connection with any such offence. We sincerely apologise to Dr Stewart for the distress and embarrassment which he has suffered as a result of our very serious error and we have unreservedly withdrawn the allegation".

Gay Star News had published its story in response to a Sunday Gleaner report in which Stewart, pastor of the Portmore Lane Covenant Christian Church in St Catherine, was quoted as saying that, "somebody must stand up to homosexuals."

Last week, Stewart said he was convinced that the allegation was part of a strategy to discredit anyone who is opposed to the homosexual agenda.

"We know it's part of a strategy to cut down the credibility of people opposed to their agenda. But there is a God in heaven and my stance on homosexuality has not changed," Stewart told The Sunday Gleaner.

He said another entity operated under the moniker, The LGBT Network, picked up the story from Gay Star News and plastered it on its website.

Stewart said when his lawyers contacted the entity, they discovered that it was run by one individual, "and he begged us not to sue, as he did not have any money to settle."

"We agreed to leave it, because we would incur a cost to pursue someone from whom we could not collect. ... I was initially angered that they would stoop so low, but honestly not surprised. If they can't get you on their side they try to discredit you," said Stewart.

According to Stewart, his lawyers are now pursuing defamation cases against four entities based in the United States. "They do not want to settle, so we are going to court," said Stewart without naming the entities.