This can't be 'Wright'! - Children of former Falmouth mayor evict his widow from matrimonial home 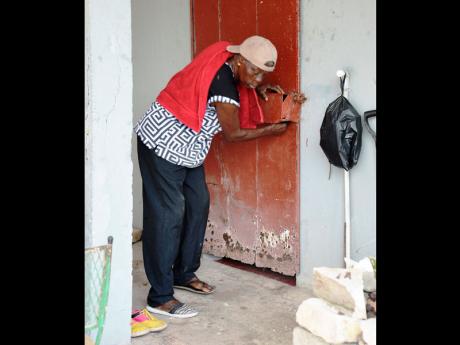 Hyacinthia Wright opens the door to the shop she now calls home.

After being married to the former mayor of Falmouth, Joseph Wright, for half of the 40 years they had been together, 68-year-old Hyacinthia Wright is now facing a life of uncertainty after, as she puts it, "being cast aside like an old rag by his children", some of whom she helped to raise.

Following the former mayor's death last October, his children have asked his widow to leave the house she shared with him, and now she is sleeping at a premises which operates as a shop during the day.

"I am gutted, because over these years, we had no quarrel up to the time their father passed away," Mrs Wright told The Sunday Gleaner last week.

"I was their mother away from their (biological) mother. We never had any problem like stepmother and stepchildren usually have ... I saw them as my children," added the distraught widow who is called 'Miss Little' by friends and family.

According to Mrs Wright, after her husband died from natural causes at the age of 85, the relationship between her and his four adult children broke down as they decided they wanted her out of the house, which she said she had encouraged him to place in his will for them.

Mrs Wright, who has spent years working in the hospitality industry, met her husband in the early 1970s when he returned to Jamaica after spending several years in England.

After they established a relationship, he purchased property and constructed their first house on Victoria Street in Falmouth.

He went back to England in 1974 and returned to Jamaica a few years later, with three of his four children in tow.

With the consent of Mrs Wright, the children, who were about the primary-school level at the time, started to live with the couple.

"I can't tell you that of all the years that we have had an argument or a contention, we did not have a bad relationship," said Mrs Wright.

"I took the best care of them from high school to college ... there were no other family members but me and Mr Wright."

The widow told The Sunday Gleaner that she was responsible for her husband becoming a member of the People's National Party and eventually councillor for the Falmouth division. He went on to serve as mayor of Falmouth for 17 years, before retiring from representational politics in 2003.

With things going well financially for them in the late 1980s, the Wrights decided to purchase an additional property in Hardy Pen, located on the outskirts of Falmouth.

"This was where we decided to build our dream house ... we felt it was also perfect for the children when they came on vacation, because by then they had all returned to England," explained Mrs Wright.

"Mr Wright and I put hands together to build this house, no help came from the children, they did not lift one gravel," she charged.

Prior to her husband's death, and not certain which one would die before the other, she said she encouraged her husband to make his will and give that house to the children.

"The will states the house is for the children and everything in the house belongs to me," said Mrs Wright, as she argued that the understanding was that her things were not to be molested until she was ready to take them out.

"I agreed for it to go this way because I knew that if he passed on before me, I would not want to stay there all by myself."

However, following her husband's death, Mrs Wright was given a one-month non-negotiable ultimatum to leave the former matrimonial home.

She was subsequently locked out of the house, forcing her to live in her shop, which adjoins their first home. This property has been rented to a state agency for several years.

In a letter dated February 26, 2014 and signed by all four children, the executors of the estate was told that the children planned to take action to ensure that Mrs Wright vacate the house.

"It appears that the wife of our late father (Joseph Wright), who is a guest in our Hardy Pen dwelling, has no intention of relocating to 19 Victoria Street (the rented property)," the letter stated.

"With this in mind, and you powerless or reluctant to address the situation, we need to take action," said the children in the letter.

It continued: "It is our intention to start refurbishment of the property from 31 March 2014. Therefore, please advise our guest to carry out the following by the 28 March 2014, relocate to the en suite bedroom adjacent to the master bedroom; remove furniture and fixtures given her from the property.

"Anything left in the property beyond the given date will be deemed surplus to requirements and disposed of as we see fit.

"Our guest has refused dialogue up to this point, therefore, these instructions are non-negotiable."

The development has angered one former high-ranking Trelawny politician, who has been friends with the Wrights over the years.

The former politician, who asked not to be named, said he thinks Mrs Wright was an integral part of the success of her late husband.

"She was the architect of all his successes and his popularity," said the one-time member of parliament. "It was through her connections that he was introduced into politics ... most of his achievements over a great political career was as a result of her contribution."

When The Sunday Gleaner accompanied the distraught widow to check on her belongings at the Hardy Pen property recently, she was allowed access to only a small washroom, where household items, her personal belongings and memorabilia of her life with the late mayor are packed up.

The washroom had an unbearable stench as unplugged refrigerators contained rotten meat, which was covered with maggots.

"I had a good life with my husband for 40 years, and now I am treated with indignity," lamented Mrs Wright. "I have no access to my clothing, our personal stuff, or the things that tell the story of our life together ... I was with him the night before he died. The last thing he said to me at Hope Medical was take care of yourself, I love you ... you really take care of me.

"If my husband and I knew that this foolishness would take place, I would not have agreed to do it (the will) the way we did, but I encouraged it because, for me, family is family," said Mrs Wright.

Faced with the prospects of being shut out of the house that she helped to create over four decades, Mrs Wright is preparing to mount a legal challenge against the children she once cared for.

Efforts to get a comment from the children through the executor, Carlton Gordon, have so far been unsuccessful.

However, Gordon told our news team: "It is a family matter, I really don't want to comment ... I think the family should come together and settle their differences."