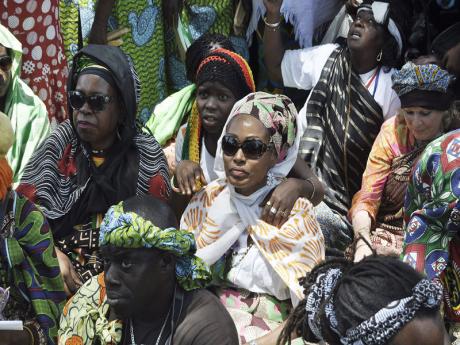 Denise Isis Miller has never shied away from being a cultural contrarian. It is in her blood.  Raised in a home where the philosophies of Marcus Garvey and Malcolm X were expounded in almost biblical fashion, she was labelled as different.

She is a Rastafarian who looks towards Ethiopia for spiritual nourishment. But soon, that changed.

As a broadcast journalist in her native land of Jamaica, she was hand-picked to be one of the promoters of The Gambia Roots Festival, a mega event in the mother land that invites the diaspora "home," to experience the wonderment of African culture and spirituality.

Miller switched gears, if only for the moment, and absorbed what West Africa was eager to offer.

"I see no contradiction. The continent is vast with diverse cultures so there is so much to learn," she said convincingly. And embracing life through this multilayered prism, Miller embarked on an unforgettable and awe-inspiring journey, along with renowned griot, Mutabaruka, publicist Sharon Chambers, and an 18-member delegation.

"It literally transformed my life. It was an incredible feeling visiting the place that inspired Alex Haley's legendary television series, Roots." Back to Africa was now a reality.

Miller needed to feel the energy of the people, venturing out, away from the nestled comfort of hotel suites. She described bustling markets and the competitive drive of vendors, plying their trade with tireless abandon.

"It was reminiscent of the markets in Jamaica and Trinidad," Miller opined. And it was on one of those 'grounding' trips with 'the people' that she locked eyes with a young Muslim woman.

She described the encounter almost in reverent language. "I broke down. The connection was that powerful. Both of us felt like we found each other after a lifetime apart. We both wept and embraced."

It was an ineffable moment that still mesmerises Miller as she speaks about The Gambia with affection and an indescribable feeling of having been once part of its history and traditions.

"There is just an emotive bond between Gambians and Jamaicans. They were so accommodating despite our cultural and religious differences. I cannot put my finger on it, but it is very alive and real."

Miller later recalled a spiritual catharsis, a kind of transpersonal experience that continues to impact her life on a daily.

The genesis of this awakening occurred at the much-anticipated initiation where traditional healers addressed spiritual and cultural seekers from several nations.

Donning traditional raiment, Miller was immediately enthralled by the drumming, the incredulous feats of trance-induced Juju dancers, the rituals of animal sacrifice and divination that was performed to determine illnesses.

Against the splendour of a cooperative evening, there was that distinctive, ethereal feeling. It was a transfixing ceremony that bedazzled all in attendance.

It was there that Miller was renamed 'Fatau Jammeh', and it was at that point that she relived history, travelling through time and returning with a profound, poignant and evocative message that she candidly imparted.

"Really, this was like a rite of passage, a rebirth of sorts, after the trauma of the Middle Passage. I witnessed the pride of the village and the wisdom of the elders. I felt a sense of going back in order for me to go forward with renewed purpose. It was so liberating." She paused and reflected on the spiritual rewards of her time in The Gambia.

"I would say that there was a sense of healing and wholeness. I felt and still feel an integration of self; that all of me have come together. This, I am sure, will stay with me for a while, I hope," said Miller

Today, in the vein of Garvey, Miller and others are turning their attention to other countries on the continent, such as Ghana and Ethiopia, while remaining focused on The Gambia.

"We are looking at ways in which we can transfer skills to those nations to help build infrastructure and boost their human resource." And while she understands the logistical planning and overall Herculean undertaking at hand, she remains undaunted.

In an era when the call to repatriate is no longer an anathema where one is indicted as a traitor to one's native land in the court of public opinion, Africa has emerged as a viable treasure that is culturally and spiritually inviting.

Would Miller repatriate? She never baulked. "Were it not for domestic obligations, why not?"

Feedback: glenvilleashby@gmail.com or follow him on Twitter@glenville. Dr Glenville Ashby is a social critic and president of Global Interfaith Council, NYC.