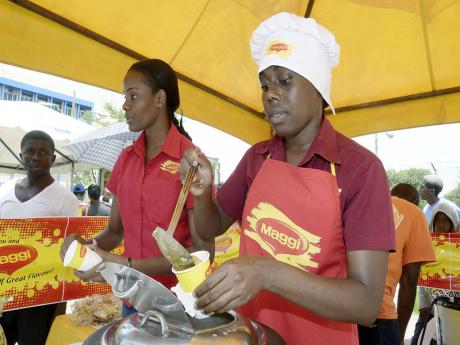 Serving up the soup at the Maggi Wheeling Out promotion at the Gleaner's East Street parking lot last Wednesday. - Gladstone Taylor/Photographer

Residents of the neighbouring communities, passers-by and Gleaner staff joined in on the feasting festivities and delighted their taste buds.

The secret of great flavour revealed itself in the likes of Maggi Chicken Soup, vegetable seasoned rice, yam and sweet potato croquettes, plantain callaloo cups and coconut cabbage, which were all crowd-pleasers.

As a bonus, samplings of the mother company, Nestle's new drink, Nesfruity, were distributed to those who had worked up a thirst.

Breakfast is the most important meal of the day, and Maggi highlighted the importance of this by showing how their products could creatively be incorporated into such an integral meal.

From the scores of persons who turned out the feedback was great, although most were too excited competing for prizes in health and wellness activities of dancing, skipping and push-up competitions, hosted by the vibrant nutrition adviser of Nestlé, Latoya Wright.