My dad grew me 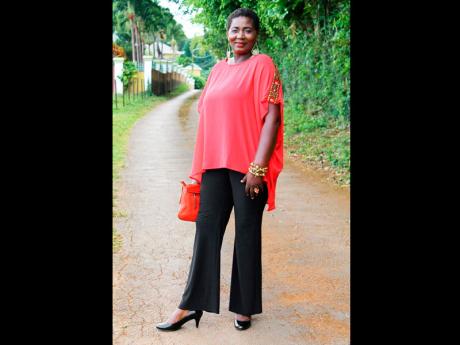 A sheer high-low coral top with bronzed embellishment is worn over a black jersey jumpsuit. 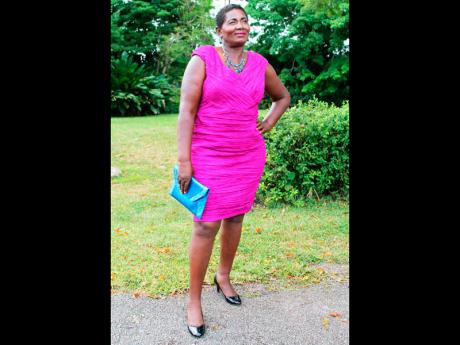 Colour-blocking is achieved by the use of accessories. Here, the rich purple cap sleeve dress is accented with jewellery and an envelope clutch in a striking cobalt blue. 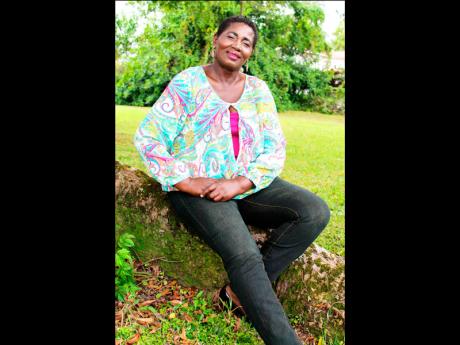 A sheer mint green blouse with a soft paisley print is worn over dark denims.
1
2
3

Joy Mattis was born in Lincoln, Manchester, in the year Jamaica gained its Independence - 1962 - a time when the country was ripe with rebirth and hope.

Her father, Augustus Mattis, known as 'Maas Gussie' to everyone in the Lincoln region, was a successful farmer. He invested his earnings into purchasing land to farm, lease and raise animals. At 6' 4" tall, he was slender, strong and a jovial man who was loved by everyone in the community. After being married twice, he fathered 28 children, all of whom he supported financially.

Mattis told Outlook, "My mother died when I was around three years old, so it was my father and my grandmother who raised us, and my father was the best!"

Mattis recalls that growing up with so many siblings was a lot of fun. They were never rich, but her father made sure they were never hungry.

But Maas Gussie had some strict rules. The children were forbidden to beg, were encouraged to always speak the truth, earn money honestly, and to have manners, as this would take them far in life.

Living on a farm taught the Mattis children how to handle their responsibilities with earnestness and, because they grew up seeing hard labour, they were not afraid of it and quite possibly grew to expect it.

When her father took ill, Mattis cared for him until his death, saying,
"If every father was like my father, every pickney inna Jamaica woulda
comfortable."

Mattis remembers her father teaching them the
business principle of diversifying their portfolio. "He told us to
'spread out and try plenty different tings' to make a
dollar."

And in her life, Mattis has tried many
different things. She had a brief stint as a hairdresser; she was also a
domestic worker, and what she describes as her 'big break' came when
she was employed at The National Solid Waste Management Authority. She
started as a street sweeper - a job she never felt ashamed of.

"To be honest, as long as it is my honest bread, I
will do anything. I just grab my gloves, my bags, my rake and I shoot
off at five every morning and sweep the streets." She enjoyed sweeping
the streets because it was honest work. "As long as I am not stealing or
selling my body, it is good work," she tells
Outlook.

"It gives me pride to see
that my hard work helps to keep my country clean," she
adds.

Years later, she was promoted to work on the
garbage truck as the assistant to the driver as a 'side man'. She enjoys
riding on the side of the truck and being hailed by strangers. "They
would say, 'Big ooman, mi respect yuh! Jah know!'," she recounts, adding
that some even offer to buy her a drink or lunch for the
day.

For five days a week, Mattis also works at the
Mandeville Hospital as part of their janitorial staff. After completing
her eight-hour shift at the hospital, she begins her shift on the
garbage truck.

On the weekends, she will take on
additional days' work as a domestic worker, but she says "only if the
pay is right".

When asked where she gets her
relentless work ethic, she immediately says, "Mi fahdah teach mi
good."

The self-proclaimed 'rude girl', who says she
was never made for school, melts when she speaks of her father. In his
legacy, he has given Jamaica a strong woman who is not afraid of hard
work and who lives her life with integrity and
honesty.

How do you spend
your weekends?

I get up on Saturday
mornings, take a shower, tidy up my room, eat something, and then I
sleep for the whole day, because my body is tired. On special Sundays, I
try to go to church.

What
is your favourite Jamaican vacation spot?

A
few years ago, I was part of a team that won a dart competition and the
prize was a trip to Dunn's River Falls and I really enjoyed
it.

Where is your
favourite dream international vacation
spot?

Los Angeles, California, because of
what I've seen in movies, but also because I love basketball and the LA
Lakers is my team.

Who is
your favourite author?

To be honest, I'm not
much of a reader, but when I read, I read the Bible. I love the book of
Psalms. These days, I help to teach my grandchildren how to read their
little books.

What is the
best advice that you have ever
received?

When you work, save as much as you
can. As my father's best friend Mr Lewis used to say- 'knot yuh cattah
and save sumpn, if is even a
dollar'.

What is the
charity that means the most to you?

To be
honest, I don't really have any one charity, but what I love is anybody
who helps to take care of children.