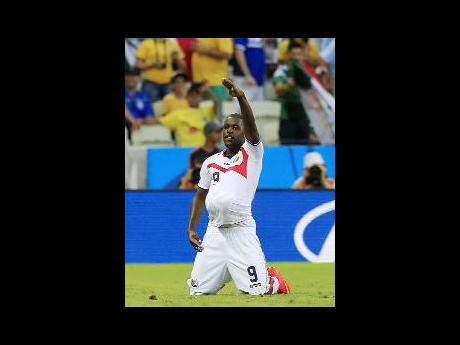 For a second day running, this spectacular World Cup left everyone in awe. This time, it was Costa Rica which produced a huge upset.

A day after defending champion Spain was sensationally routed 5-1 by the Netherlands, a small Central American nation with a minor World Cup pedigree came from behind to beat 2010 semi-finalists Uruguay 3-1.

Costa Rica's victory spoilt a perfect record so far for South American teams, with Colombia having beaten Greece 3-0 in yesterday's opener following victories for Brazil and Chile over the previous two days.

It also proved that while Colombia can thrive without their injured star Radamel Falcao, Uruguay are lost without their top striker Luis Suarez, who was sitting on the bench nursing a bad knee. Adding insult to injury, Maxi Pereira became the first player to be sent off at the 2014 tournament after he kicked Costa Rica's best player, Joel Campbell, to the ground in the closing minutes.

In a free-scoring tournament, the goals continued to flow yesterday, following the trend set by the Netherlands. And like Spain, Uruguay proved that four years can make all the difference at the World Cup.

Along with goals, a World Cup also thrives on upsets. And even though Costa Rica had already proven in qualifying they are a solid team, few would have counted on Uruguay to fold so quickly after Edinson Cavani scored the opening goal.

Costa Rica conjured up the spirit of 1990, when they upset Sweden and Scotland to reach the second round in their first World Cup. The 2014 team fought back and victory did not come against the run of play.

Diego Forlan won the Golden Ball title as best player four years ago, but at 35, he was a shadow of his former self and was replaced as Uruguay went looking for a way back into the game. But no one could step up to take over from the injured Suarez.

Compare that to Colombia, who showed off theirs new generation to the world.