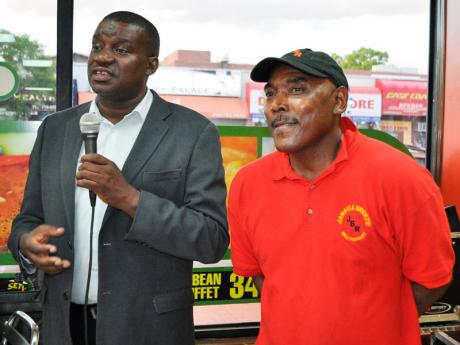 Mike Duncan (left) speaking at the opening of his restaurant with executive chef Delroy 'One Son' Kerr. - Contributed

Despite the fact that New Yorkers have a passion for eating out, the National Restaurant Association estimates that more than 80 per cent of the 1,000 new restaurants that open in the city each year will flop. Many go out of business within the first three months of opening. So going against the odds, it was with much pride and fanfare that two Jamaicans in New York, Michael Duncan and his sister Clar Weah, celebrated their first year of operating the hugely popular Jamaica Breeze restaurant, while at the same time announcing plans to open two new outlets within six months.

Duncan made the announcement at the first anniversary celebration hosted recently at Jamaica Breeze, located at 232-02 Merrick Boulevard in Queens, to thank community members for turning his new restaurant into a resounding overnight success.

"I want to thank everyone of you here for enabling the restaurant to flourish, and based on consumer demand, we are opening two new outlets right here in Queens within the next six months. The process started three months ago to identify suitable locations, and our aim is to duplicate the same excellent food and service in the new locations as we are doing right here on Merrick Boulevard," Duncan said.

Duncan also paid tribute to his staff, led by Jamaica-born executive chef Delroy 'One Son' Kerr who is from Burnt Savannah in Westmoreland. "Our extremely loyal and dedicated staff is the backbone of the business and we are blessed to have a staff like the one we do who treat this operation like their own business," Duncan stated. He also thanked his business partner and sister Clar Weah for her unwavering support, his marketing company as well as his colleague and actuary at AIG, Raymond Dugue. Duncan said he is in the process of providing health coverage for his workers, not through traditional channels but by utilising the services of a medical doctor in the community.

Jamaica Breeze opened to the public on June 1 last year, and the eatery immediately distinguished itself by providing a dazzling array of traditional Jamaican dishes for breakfast, lunch and dinner, seven days per week. Apart from the mouthwatering food, there are other factors that have made Jamaica Breeze a standout success. The restaurant will give back 10 per cent of every dollar spent to an approved charity of the customer's choice. Also, late last year, Jamaica Breeze became the first restaurant in New York City to accept Jamaican dollars as a form of payment, and that system has been working well. Meals are calculated based on the official exchange rate of the day.