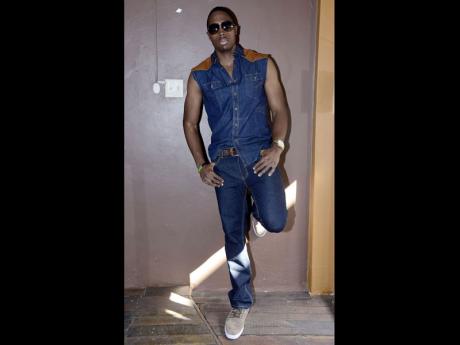 A sleek denim suit with shades and light brown pair of shoes. - Photo by Gladstone Taylor 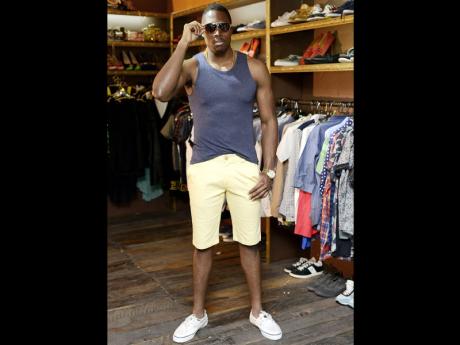 For a day at the beach or a barbecue, this light yellow shorts and navy blue top, with a pair of cool shades, would be ideal. - PHOTO BY GLADSTONE TAYLOR 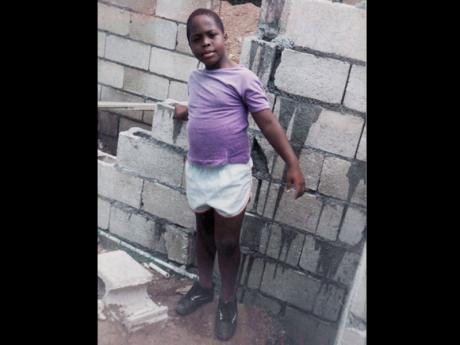 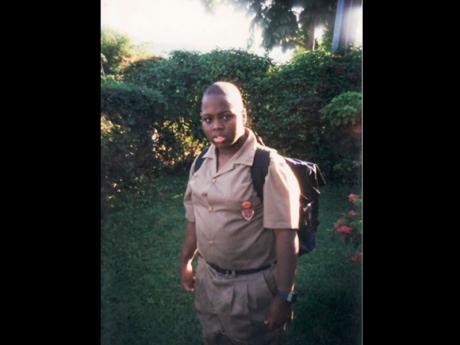 Struggling with weight is a battle many know all too well. Some cave under the pressures of cravings, leading a life of obesity, while others rise above, taking charge of their lives by journeying the road of good health.

For Kamau-Akeele Brown, the rocky road to transformation turned out to be a rather rewarding one. Not only did he exceed his personal target weight loss but he also consequently tapped into his motivation to inspire others to reach for their goals.

He learned the hard way that the world was a cruel place and it was never too early to take matters into your own hands and do something about it."When I was attending Mona Preparatory School, I was a chubby child and other children at school were never shy to point that out," Brown told Flair.

Foods like burgers, hot dogs, cookies, chips and sodas became a regular part of his daily intake, packed with love by his mother, "I really loved food. On a good day, I would get something like a hot dog and a burger and I'd look forward to it because my mother was a great cook. Otherwise, I would go to the canteen and satisfy my cravings with patties or donuts."

The harsh reality of his health crept in at the tender age of 10 during a visit to the doctor's office. "During my usual check-up at the paediatrician's office, I realised he grew quite alarmed and upset after my weigh in. He told me that I looked horrible for my size at that age, and this led to tears. All the while, he made me aware of all the dangers and risks if I continued with my eating habits and lack of consistent physical activity. From that day, I attempted to make exercise my good friend.

The eating trend, however, continued right up to his years at Campion College, and it was there that the challenges developed, "I was actively involved in track, basketball, field hockey, tennis, swimming and martial arts up until third form, but after not curbing the eating habits, it made my progress harder and slower to visualise," he shared.

Those taunting words from past students and his paediatrician continued to resonate with him and he used that to further fuel his drive to reach his goals. Coupled with that was his passion for weightlifting, which he described as love at first sight after his brother introduced him to the activity in fifth form.

An undergrad at the University of the West Indies (UWI) Mona, with encouragement once again from his brother, 18-year-old Brown applied and became a student instructor at UWI gym. "I took three courses for certification about six weeks during the summer period, courtesy of the UWI Guild. These involved aerobics, weight-resistance training,

and nutrition classes, and at the end, I took exams for all three. I learned a lot and I'm grateful for those classes, the teachers and fellow co-workers that I met."

The innate ability to guide persons in the direction they sought to go both physically and mentally came out as he charted the course to become a certified trainer. He loves helping and inspiring others to reach their goals, using his own story as motivation.

Brown spoke of two of his best clients he met along his personal training journey. "I met a girl in her 20s who loved the stage. She was a bit overweight in my opinion, but way overweight in hers. Jovial and entertaining, she invited me to her shows. Instantly, a connection was made. Her aim was to lose weight in a short amount of time at first, but working with her for weeks turned into months, which turned into years. It took patience, dedication and some sacrifice to reach where she wanted and she was able to get there. We still chat and I still 'train' her by giving tips and motivational talks via social media because we never have time again to physically meet for sessions due to our current conflicting schedules."

He continued, "I also met a medical student from Trinidad who came to the gym, at first to just lose some belly fat and nothing else. With her hectic schedule being a med student, you would think she'd be content in just coming every once in a while and putting in some work. I saw the hunger and potential she had to put in the extra work and get the body she yearned for. She surpassed her goals, and over the years, I'd not only just train her but I'd train along with her. I watched her transform into a female fitness model, lifting weights a lot of men I know can't," he ended.

His advice to someone struggling with weight, "Never quit. Once you've started, the hardest part has already been done. It's just now to work on continuity, consistency and most importantly, patience and belief."

Along with his career path as a graphic designer, fitness model, and entrepreneur, personal training has become a permanent fixture. Brown is currently an independent personal trainer and can be contacted for consultation at kamau.akeele@gmail.com.