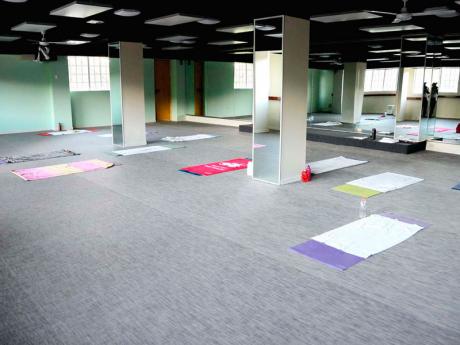 The Bikram Yoga Jamaica studio has the capacity to hold up to 40 students with yoga mats and towels on the floor, heaters attached to the ceiling, and a huge mirror right of the studio. - Photos by Winston Sill/Freelance Photographer 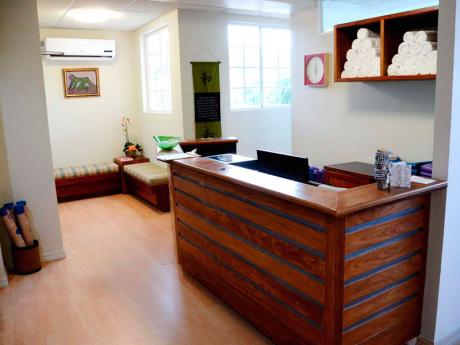 The reception area of the Bikram Yoga Jamaica studio. 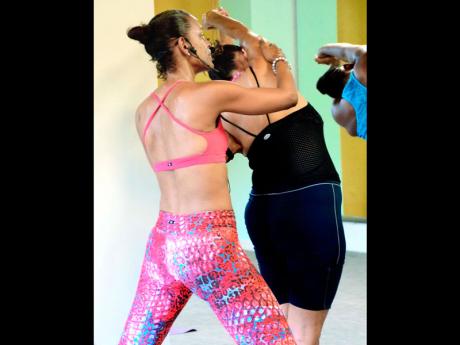 Instructor Yolande Lloyd-Small assists one of her students with the half-moon pose. 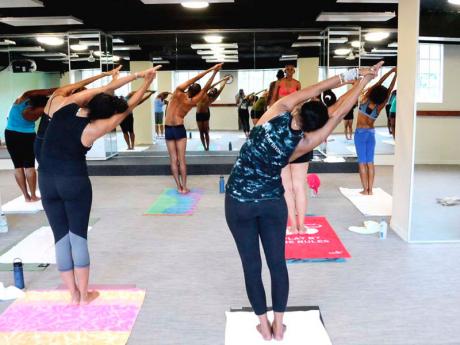 If you like a hot start to your day or a peaceful, stepping into Bikram Yoga Jamaica (BYJ), this summer shouldn't be a problem. However, the hard part is staying there for 90 minutes.

Here is what Maxine Willocks had to say after her second day at the studio. "Last night, I felt my organs shift and I knew directly what it was, because I do other yoga as well and the movement that I had in my body was different, so I knew it was because of Bikram yoga. I felt well rested and wanted to fall asleep."

The studio of BYJ has the capacity to hold a maximum of 40 persons. It is equipped with heaters attached to the ceiling that produce heat, transforming the room into a humid, 105°F furnace, allowing individuals to safely work deep into the muscles, tendons, and ligament, while releasing toxins and congestion from the body.

This ancient system of self-care brings vitality, health, deep relation and peace of mind. The front of the studio is outfitted with a large mirror that is used for the students to listen and concentrate on doing their poses and flexing their body the right way.

The yoga session kicked off with two sets of 60-second breathing exercises by inhaling through your nostrils, exhaling through your mouth, allowing more air to enter your system to endure the rest of the session. It will also be tempting to close your eyes, but it is encouraged to resist the urge as it may lead to dizziness and nausea.

There are some persons who might not be able to pull through all the postures, but there are a few tips that they can utilise to survive the 90 minutes of hot yoga.

The instructors encourage students not to think about the heat, just do it and when they feel dizzy; they should sit down, Japanese style, and breathe through their nostrils. Trust that you can recover in less than one minute by simply closing your mouth and breathing through your nostrils.

During the second round of the session, the fan is then turned on to cool down the yoga heat a bit, and individuals get the signal that they are almost at the end. Here's a look into the Bikram yoga lifestyle of the new fitness kid on the block.