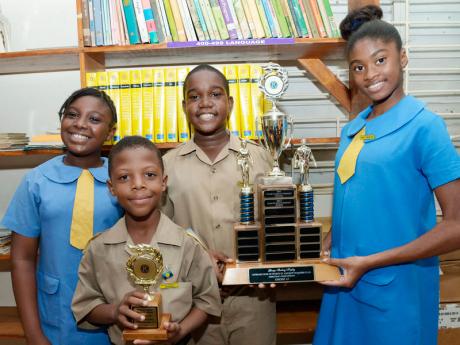 A group of young debaters are advocating for more public-speaking opportunities to be extended to primary-school children across the island.

The champion debaters of the Dunrobin Primary School in St Andrew said after their brief sojourn in a recent debating competition, they are now convinced that children across the island should be given similar opportunities to express themselves and learn new skills.

The first-time debaters could not stop gushing about how much more confident they have become since they entered the competition.

"It's a competition that builds your confidence and gives you the opportunity to express yourself on a variety of topics and it makes you more aware," said grade-three student McLean.

For his teammate Tianne, there is no doubt that the competition has given them a better grasp of the English language and when they get to the Grade Six Achievement Test (GSAT) next year, they will be better able to ace subjects such as Communication Tasks and English.

"Debating competitions give you a chance to use the English language, both in writing and speaking, and so your vocabulary is better and your ability to structure sentences as well," the grade-five student said.

Both Clarke and DaCosta agreed that they will not have anything to fear when they approach GSAT next year, as they are already well versed in the subject.

The students said they believe such competitions are lacking across the island and they believe these contests should play an integral part in students' development.

Because of this, one of the team's coaches, Sandra Graham-Mitchell, said they are making every effort to get more students involved in the debating society.

"It helps to build their confidence and you can see the improvements in their use of the language," she stated, adding that the students are also taught how to respectfully defend their points and be considerate of varying opinions.