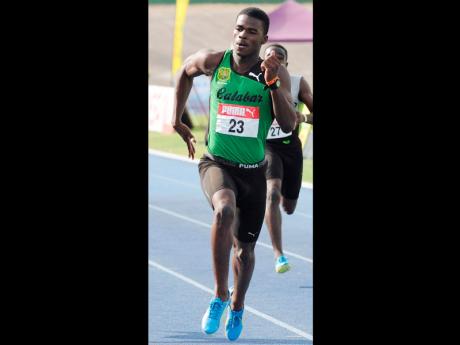 CALABAR High School's Michael O'Hara proved once again that he is the best Under-20 male sprinter in the country, as for the second time in two days he got the better of Bog Walk High's Jevaughn Minzie, by winning the 200 metres final.

O'Hara raced to victory in 20. 96 seconds - despite a negative wind of 2.0 metres per second (mps) - as the two-day JAAA Supreme Ventures National Junior Championships came to an end at the National Stadium yesterday.

Minzie was second in 21.56 seconds, with Shamar Barnes of Cameron Blazers Track Club third in 22.66 seconds.

In the girl's Under-20 200, St Jago High's Natalliah Whyte won in 23.77 seconds, turning back the challenge of G.C. Foster College's Kedesha Dallas (23.91) and the University of Technology's Shimaraya Williams (24.14) seconds.

Papine High's Tiffany James stepped up to the Under-20 category in the 400 metres despite still qualifying to compete at the Under-18 level. She pressed on the gas with some 40 metres to go and won in 53.69 seconds. Vere Technical's Yanique McNeil (53.84) and Balaclava High's Dawnalee Loney (53.85) had a keen battle over the final 20 metres and had to be separated by a photo finish.

Following a string of below-par performances this season, St Jago's Manley - the World Youth champion - took the boys' Under-20 event. Despite early pressure from teammates Nathon Allen and Ivan Henry, along with Vere's Twayne Crooks, the versatile Manley won in 46.24 ahead of Allen (46.39) and Crooks (47.26).

In the girl's Under-20 100 metres hurdles - where the wind reading was negative 6.1 mps, overseas-based Deshon Gordon followed up on her second-place finish in the 400 metres hurdles with an easy victory, clocking 14.06 seconds to beat World Youth champion Yanique McNeil of Holmwood Technical (14.84) and Wolmer's Girls' Shantae McDonald (15.01).

Running into a negative wind of 2.2 mps, Jamaica College's Tyler Mason took the boys' Under-20 event in 13.87 seconds, getting the better of St Elizabeth Technical High's Marvin Williams (13.97) and Calabar's Seanne Selvin (14.12).