Fun in the Son set for July 12 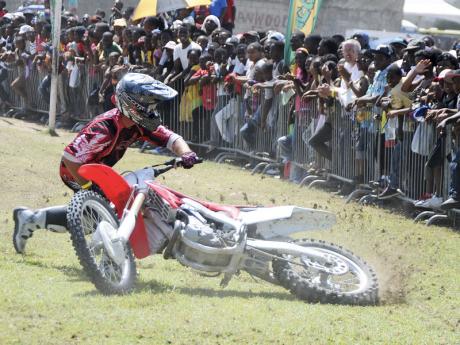 Bike stunts are a major highlight of Best Dressed Fun in the Son. - Gladstone Taylor/Photographer

The date for the biggest gospel show in the island has been set and the star-studded line-up has anticipation running high.

Hundreds turned up at the Portmore Holiness Christian Church last Friday for the launch of the 2014 Best Dressed Fun in the Son Gospel Festival.

Those in attendance were not disappointed as preview performances from Jermaine Edwards, Carlene Davis and Kevin Downswell sent the audience into worship mode, giving guests a small dose of what is to be expected in a few weeks.

In his address, Christopher Levy, CEO of Jamaica Broilers Group, told the audience he expects this year's festival to be among the best. He encouraged Jamaicans to make the trek to the sunshine city for a concert he said was very important in helping to heal the nation.

"Thousands come to know Christ through this event and that is a very important start to healing the nation," he said.

Though originally expected to be hosted at Jamworld, the July 12 festival will be held at the Portmore Town Centre and will boast a number of new attractions.

High on providing quality family entertainment, for the first time in Fun in the Son's history, organisers have booked marching bands to add an extra-special boost to the entertainment package. In addition, there will be a food court and a health village set up on location.

Organisers also revealed that in the weeks leading up to July 12, they will be having football competitions in communities islandwide.

Each finalist from different communities across the island will compete in the Best Dressed Fun in the Son Ball Fest on July 12. The day's activities will also include an extreme sports centre equipped with dirt bikes and ramps.

The event is sponsored by the Jamaica Broilers Group and produced by Tommy Cowan's Glory Music.