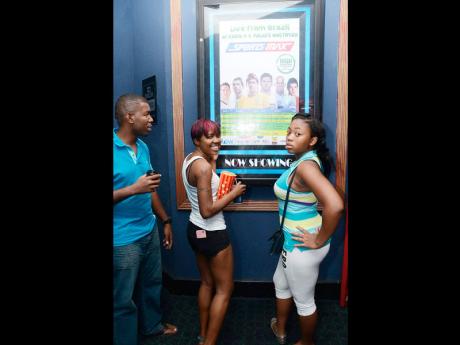 World Cup fans are wild with enthusiasm, and those viewing at Carib 5 since the opening ceremony and kick-off match last Thursday have been enjoying the big-screen experience.

Palace Amusement Company has been bringing World Cup football to cinema screens and the potential for other sporting events is now wide open.

Partnering with SportsMax, the company will be showing 20 of the top first-round matches, all four quarter-finals, the two semi-finals and the final match.

"Carib 5 in Cross Roads now flies the flags of the competing nations of the FIFA 2014 World Cup and beckons fans to enjoy the best available front-row experience live, on a 30-ft screen in HD with 5.1 surround sound and in crisp air-conditioned comfort, topped off by combo deals of beer, hot dogs and nachos," the cinema said in a release.

After a well-received opening match, Melanie Graham, marketing manager, said she expected the audience to build as the rounds progress.

"The shouts of goal in unison and the spirited debate between team supporters is being experienced at the cinema," she said. "We invite the fans to come out for an experience like never before."

World Cup matches are being broadcast in high definition at Carib 5 in Kingston and Palace Multiplex in Montego Bay, with pregame shows starting 40 minutes before advertised match times.