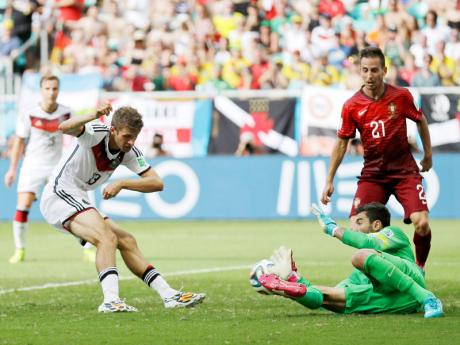 Thomas Mueller scored a hat-trick as Germany turned on their style and power to rout 10-man Portugal 4-0 in their World Cup Group G opener yesterday.

Mueller, who scored five goals in the 2010 World Cup, was ruthless against a weak Portugal team that was clearly outplayed despite the presence of Cristiano Ronaldo.

"To score three goals in the World Cup opener against such an opponent is great," Mueller said.

With Chancellor Angela Merkel supporting in the stands, the German team celebrated its 100th World Cup match with a rousing victory that was virtually assured by half-time.

"After 20 minutes, we looked up at the clock and thought it was going to be a long day," Mueller said. "But we got into the match very well and when you lead by 2-0 in this heat and then even get the third, it was all over."

Four years ago, Germany started with a 4-0 win over Australia and reached the semi-finals. What must be worrying for their opponents is the apparent ease with which Joachim Loew's line-up disposed of the fourth-ranked team in the world. Germany next face Ghana on June 21 and the United States on June 26.

Mueller scored either side of Mats Hummels' headed goal as Germany took a 3-0 lead at the break and added his third goal in the 81st.

Ronaldo started at Arena Fonte Nova after overcoming a knee injury. He faded after threatening early in the match, including a shot from a break that Germany goalkeeper Manuel Neuer could only block, but there was nobody from Portugal to pounce on the rebound.

"We lost the game already in the first half," Portugal coach Paulo Bento said. "We couldn't come back in the second. Germany played very well, we couldn't do anything."

Portugal were already 2-0 down before Pepe was red-carded in the 37th minute for apparently head-butting Mueller when the German player was sitting on the ground. Pepe had stuck his hand into Mueller's face and the German went down.

"I got hit, but after that, I am not really sure what happened," Mueller said.

It was Mueller who opened the scoring in the 12th minute after Mario Goetze had been pulled down by Joao Pereira in the box, coolly slotting the penalty kick into the right corner of Rui Patricio's goal.

"I've been in some big matches before, so it's not like I was afraid," Mueller said.