US emerges bloodied and victorious against Ghana 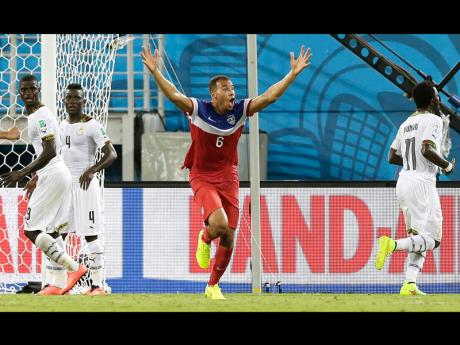 The United States' John Brooks (centre) celebrates after scoring his side's second goal during the Group G World Cup football match between Ghana and the United States at the Arena das Dunas in Natal, Brazil, yesterday. Brooks' goal gave the US a 2-1 win. 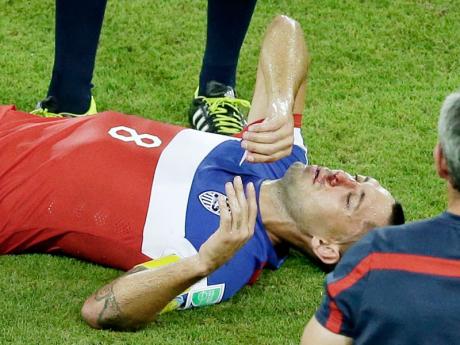 The United States' Clint Dempsey lies on the pitch after being kicked in his face during the group G World Cup soccer match between Ghana and the United States at the Arena das Dunas in Natal, Brazil, yesterday. Dempsey scored the opening goal in the US's 2-1 win. - AP photos
1
2

After 90 brutal minutes of end-to-end action, the Americans emerged with a thrilling 2-1 win over Ghana.

"It was a grind, but it was a wonderful win at the end of the day," coach Jurgen Klinsmann said.

United States fans were screaming for revenge yesterday after the Black Stars eliminated the Americans from the last two Cups. They got it at a price.

Clint Dempsey scored a shocking goal a half-minute in, but the US couldn't make it stand up. Andre Ayew tied the score in the 82nd minute after a brilliant back-heel pass from Asamoah Gyan, who had eliminated the US four years ago.

And then, just four minutes later, 21-year-old John Brooks rose to head in Graham Zusi's corner kick from eight yards - the first substitute to ever score for the United States in 30 World Cup games over 84 years. The defender, an unexpected addition to the American roster, was so overcome he fell to the field and was unable to move even after teammates climbed off the dog pile. He had made his national team debut only last August and Brooks hadn't scored in four appearances.

The US players ran onto the field to celebrate at the final whistle, jumping as supporters chanted "U-S-A! U-S-A!" Now the Americans are in a good position in Group G, where Germany opened with a 4-0 rout of Cristiano Ronaldo and Portugal.

"We got the three points that we badly wanted," Klinsmann said.

He had predicted this would be like a final. Jozy Altidore was hoping it wasn't his finale.

The forward was carried off on a stretcher after his left hamstring gave out in the 21st minute when he tried to control a long ball. He awaits tests that will determine whether he can return for this World Cup.

Dempsey went down too on a balmy late-autumn night, but he stayed in the game. The US captain ended the first half with a tissue up his nose, which he said was probably broken, to stop the bleeding after John Boye's kick to his face during a battle for a header in the 31st minute.

"I just had trouble breathing," Dempsey said afterward, his nose swollen and cut. "I was coughing up blood a little bit. Hopefully I'll be able to breathe through my nose again before the next game."

Tim Howard made big save after big save as Ghana outshot the US 21-8.

Matt Besler came out at the start of the second half after feeling tightness in his right hamstring. It was his replacement, Brooks, who scored the winning goal. Zusi was also a sub, coming on for the hobbling Alejandro Bedoya in the second half.

By the time of the final whistle, the US line-up had Brooks in central defence and a virtually invisible 23-year-old Aron Johannsson at forward.