It's the sweetest one - Parker 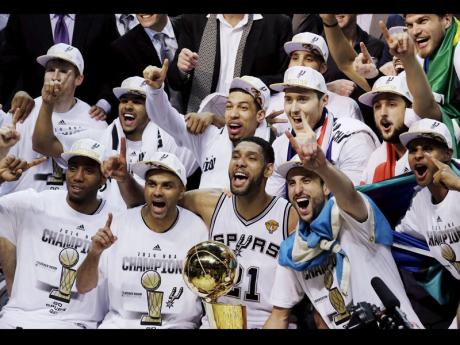 The San Antonio Spurs celebrate after Game Five of the NBA basketball finals on Sunday night in San Antonio. The Spurs won the NBA championship 104-87. - AP

Tim Duncan and Tony Parker won titles in their second seasons. Manu Ginobili was a champion as an NBA rookie.

Success came so quickly and frequently for the Spurs' Big Three, but San Antonio couldn't keep it up after winning their last title in 2007. And just when they were on the verge of being back on top again last year, the Miami Heat practically snatched the championship rings right off their fingers.

So when they finally celebrated again on Sunday night, players wrapping themselves in flags from around the world in a reminder that the Spurs look far beyond the border to build champions, Parker had no trouble deciding where to rank this title.

"That's why I say it's the sweetest one," Parker said, "because it's just unbelievable to win seven years ago and to be so close last year, it was very cruel. But that's the beauty of sport. Sometimes it's tough. And sometimes it can be beautiful, like today."

The Spurs finished off a dominant run to their fifth NBA championship, ending the Heat's two-year title reign with a 104-87 victory that wrapped up the series in five games.

Painfully denied 12 months ago by the Heat, this victory party was worth the wait.

"We got to this spot and we didn't let it go," Ginobili said.

San Antonio erased an early 16-point deficit and routed Miami for the fourth time in the series. A year after the Spurs suffered their only loss in six finals appearances - a heartbreaking seven-game defeat - they turned the rematch into no match at all.

"We had a great first quarter, but from that point on, they were the better team and that's why they're the champions in 2014," said LeBron James, who led the Heat with 31 points and 10 rebounds.

A decade and a half after winning their first title, the Spurs remain the NBA's model organisation, a small-market team that simply wins big and hardly ever does it with a high draft pick. Instead, they found players overseas or in other organisations who would fit the Spurs' way of doing things and mesh with Duncan (US), Parker (France) and Ginobili (Argentina), who have teamed for 117 post-season victories, the most by one trio - Players such as Leonard, acquired in a draft-night trade with Indiana, and Patty Mills, an Australian who scored 17 points off the bench.

The Spurs won four titles in nine years, but had gone so long since the last one that Foreigner's Feels Like the First Time was an appropriate song choice after the final buzzer.

Duncan and Popovich have been here for all of them and it was the fourth for Parker and Ginobili, who, with Duncan, are once again the reigning Big Three in the NBA.

Chris Bosh finished with 13 points and Dwyane Wade just 11 on 4-of-12 shooting for the Heat.

San Antonio will face questions - as they have for years - about the age of their core and whether Duncan, Ginobili and Popovich want to stick around. The Heat will brace for the potential free agency of James, Wade and Bosh, and will need younger, fresher pieces around the three All-Stars if they all stay.

But this moment belongs to the Spurs.