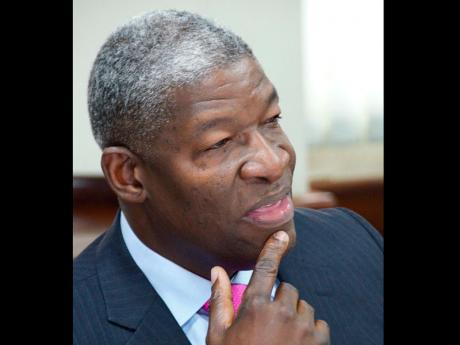 Commissioner of Police Owen Ellington. Members of the Jamaica Constabulary Force under his leadership are among public servants who have not made required financial declarations. - File

Apologies to EXIM Bank Chairman Bill Clarke and Managing Director Lisa Bell for suggesting in my June 4 column that EXIM Bank accounts for March 2013 were not available on EXIM Bank's website. Any inconvenience or embarrassment caused is regretted.

Bell is quite correct about the 2013 accounts being available on EXIM Bank's website, at 'About Us/Financials/Annual Report', where the 2013 annual report can be viewed.

However, the senior tier of the website, at 'About Us/Finan-cials', is only updated to 2011. In spite of this anomaly (still continuing on June 12, 2014), digging deeper would have revealed the 2013 annual report. Bell might now correct this confusing issue.

Bell pointed out that "financials cannot be released to the public until we have received formal approval from the Cabinet, through the Ministry of Finance ... ."

If this is the requirement, someone is acting outside of best-time practices that could aim at financial results being available to the public within, say, four months of a year end.

For example, the March 2014 EXIM Bank accounts should be finished being audited by PricewaterhouseCoopers, by June 30, 2014, and sent to the Ministry of Finance, and cleared by Cabinet a month later, by July 30, 2014, to be on the website.

Perhaps the EXIM Bank audit and conduct-review committee, chaired by Myrtle Halsall, could review, set some deadlines and have discussions with the financial and Cabinet secretaries to speed up bureaucracy.

Additionally, Chairman Clarke could adopt the same timetable, as practised by Scotiabank, that publishes quarterly results and gets out annual accounts within 90 days of the period end.

This column will review the somewhat aged March 2013 accounts, in a future column, and attempt, in early August, to review the 2014 accounts.

Commission for the Prevention of Corruption

We are grateful to the Commission for the Prevention of Corruption (CPC) chairman, Justice Ferdinand Smith, and acting secretary/manager, Denzil Haase, for having sent us their accounts, and invite other public entities to do likewise.

CPC appear to be having a hard time getting required financial declarations from public servants.

Following closely on the JCF's heels is the Ministry of Education (14 per cent) and the Jamaica Defence Force (12 per cent). The most surprisingly delinquents are members of Tax Administration Jamaica (TAJ) where 3,808 declarations were outstanding.

The Corruption Prevention Act 2000 was established to require identified parties to have finances reviewed, confidentially, by this anti-corruption organisation.

The current state of delinquency is quite unacceptable and requires immediate action by the commissioner of police, chief of staff of the Jamaica Defence Force, the permanent secretary in the Ministry of Education, as well as the financial secretary, in relation to TAJ.

Amazingly, the two financial regulators, Bank of Jamaica (676) and Financial Services Commission (255) also have staff who are delinquent in filing their returns. How can regulators violate the law with such impunity?

The courts also appear to not treat failure to follow this law as a serious offence.

In 2012, 132 delinquent declarants from the JCF were reported to the Director of Public Prosecutions (DPP) and 106 were taken before the courts, receiving, on average, a fine of over J$7,000.

In 2013, 429 JCF personnel were reported as delinquent, and only 55 per cent taken before the courts, those receiving a higher fine, on average, than those dealt with in 2012.

It appears courts are becoming more lenient. DPP Paula Llewellyn may care to comment on why so few of the cases sent to her, presumably for prosecution, have not been investigated.

Further analysis shows cases are divided into suspected serious breaches and those which are not. Eight suspected cases of serious breach, involving allegation of illicit enrichment and failing, without reasonable cause, to provide information, were reported to the DPP - JCF, three; Factories Corporation of Jamaica, two; National Works Agency (NWA), one; and Jamaica Customs Department, one.

One of the JCF cases refers to a superintendent who was investigated for possible ownership and ongoing construction of a multi-storey house in an up-scale St Andrew neighbourhood, together with other business interests.

The officer was summoned before the commission in October 2010, found guilty in January 2013, and fined $50,000 or three months' imprisonment.

A verbal notice of appeal has been given. This appears a ridiculously small fine.

Other cases brought relate to a customs officer, whose declaration showed a growth in assets in excess of $2 million during the period 2003 to 2007, and included $7 million in unregulated investment schemes. In 2012, the officer was fined $800,000.

An assistant operating manager at the NWA failed to declare three motor vehicles and his interest in a company that performed contractual duties for the entity during a period that extended over 15 months. The accused was fined $50,000 or six months in prison.

Another NWA officer failed to declare his interest in a company which performed work for the NWA. In March 2011, the officer was fined $50,000 or six month's imprisonment. At this level of fines, there is almost no penalty if one does not make declarations.

Why are offenders found guilty not named?

CPC accounts, audited by Barrett & Co, show liabilities exceeding assets by $2.7 million (March 2013) with both salaries ($2.1 million for 2009-2011) and pension contributions ($4.6 million) unpaid. Obviously, the Government is not funding the needs of this organisation on a current basis.

The commission receives $57 million from Government each year and its commissioners were paid, on average, a modest $435,000 per annum for the period.

The secretary manager, in 2013, received $4.9 million in compensation, inclusive of allowances.

Overall, this appears to be a well-run organisation putting out a good and valuable annual report, but its political masters are not being sufficiently diligent in getting it the required annual declarations.

One hopes that in the period after the above review, i.e. after March 2013, the position has changed.

This column reviews audited and in-house accounts and reports of companies and entities owned or influenced by government. Readers are invited to comment at Gleaner online or email: editor@gleanerjm.com