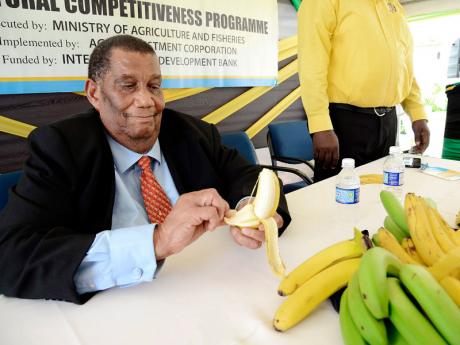 Agriculture Minister Roger Clarke peels a banana at the contract signing for Inter-American Development Bank-funded infrastructure projects for agro parks and the launch of the export market platform at the Ministry of Agriculture and Fisheries Hope Gardens office in St Andrew yesterday. - Rudolph Brown/Photographer

TWO THOUSAND pounds of banana will leave the island today for the United Kingdom (UK), the second such shipment in just over a week.

The first shipment of 2,000 pounds by Carita Jamaica Limited last Thursday marked the resumption of exports to Britain since 2008, when export volumes were in excess of 30,000 tonnes per annum.

The weekly shipments by air will continue until August, when buyers from the UK will visit Jamaica to negotiate long-term contracts for importing bananas into Britain, Agriculture Minister Roger Clarke disclosed yesterday. He said talks are also under way with the Netherlands-based company deGroot, the largest handler of bananas in Europe.

Clarke, who was addressing the signing of a civil works contract for agro parks at the ministry's Hope Gardens head office, said this was an example of just how well Government's ongoing investment in agriculture was bearing dividends. He, however, acknowledged that there was still much work to be done to organise exports in a more sustainable way.

Graham Williams of the Inter-American Development Bank, which is financing the installation of infrastructural facilities to the tune of $620 million, with the European Union (EU) spending $427 million and Government spending $1 billion, explained some of the expected outcomes from this initiative.

"Through these contracts, access roadways will be constructed, allowing farmers to significantly reduce the cost of and time to transport agriculture products from farm to market and to improve value added and storage techniques to better mitigate and plan against market fluctuations. Irrigation infrastructure will be developed in the area of Ebony Park and Spring Plains to guarantee that farmers will have access to reliable water supply throughout the year, ensuring sustainability and consistency of crops," he said.