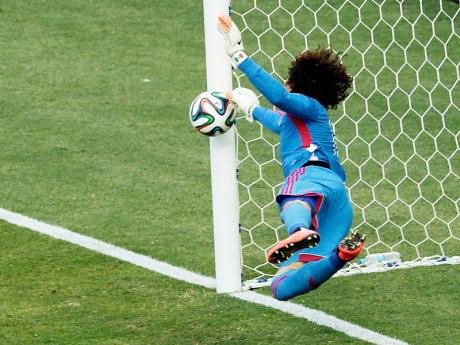 Mexico's goalkeeper Guillermo Ochoa makes a save during the Group A World Cup football match between Brazil and Mexico at the Arena Castelao in Fortaleza, Brazil, yesterday. The match ended 0-0. - AP

Goalkeeper Guillermo Ochoa made a series of outstanding saves to help Mexico hold Brazil to a thrilling 0-0 draw at the World Cup yesterday.

The result leaves both teams with four points each after two games in Group A, but Brazil are ahead on goal difference going into their decisive final matches. Croatia and Cameroon meet today for their second games after both opened with defeats.

Ochoa's first remarkable save prevented Neymar from scoring in the 26th minute. The Brazil striker's powerful header looked set to fly just inside the post when the goalkeeper dived to his right to push the ball wide.

Ochoa also made three other difficult saves to keep the hosts from breaking the deadlock - a shot by Paulinho in the 44th, a second-half effort by Neymar from inside the area and a close-range header by Thiago Silva in the 86th minute which produced a remarkable block by the Mexico keeper.

After that, there was still time for a thrilling end to the game in the northeastern city of Fortaleza.

The referee dismissed Brazilian claims for a penalty after Marcelo seemed to have been grabbed in the 88th minute. Mexico then had two great chances, first with Andres Guardado's shot over the crossbar in the 90th and then with an effort by Raul Jimenez that was stopped by Brazil goalkeeper Julio Cesar in injury time.

"In the end, the 0-0 mirrors what happened: it was a very hard-fought match," Brazil coach Luiz Felipe Scolari said. "The draw wasn't a good result because a victory would have already allowed us to advance, but we need to be able to respect our opponent, which played very well."

A win by either team would have guaranteed a spot in the next round if Cameroon and Croatia were to draw in the jungle city of Manaus.

Brazil had won all three previous World Cup matches between the teams without conceding a goal, but the Latin American rivals hadn't met in the sport's showcase tournament since 1962.

It was an evenly balanced game at the Arena Castelao, with Mexico not allowing Brazil to take control. El Tri didn't play defensively and created chances throughout the match, especially with long-range shots by midfielders Hector Herrera and José Vazquez.

Brazil, playing without injured striker Hulk, turned up the pressure in the second half, but there was no getting past Ochoa.

Fans wearing Brazil's green and yellow colours were the majority as expected, but Mexicans took over large seating sections of the stadium and at times were louder than the local fans. Among those in the crowd of 60,342 was NBA star Kobe Bryant of the Los Angeles Lakers.

Brazil, the only team to play in all 20 World Cups, have reached the second round every time since 1970. Mexico are seeking to advance for their sixth straight appearance in the last 16, where they have been eliminated in the last five World Cups.