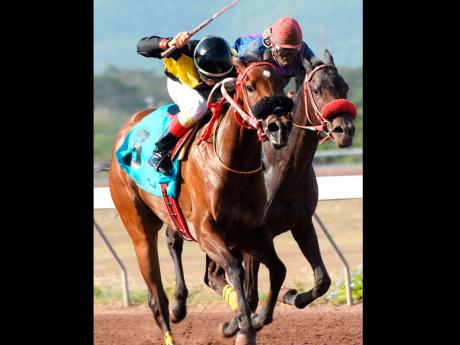 Seven horses are down to contest today's open allowance race over 1500 metres at Caymanas Park. With most enjoying good form, the competition should be close.

Both finished out the frame in the Thoroughbred Hall of Fame Stakes Trophy, over 1200 metres, on June 7. HOVER CRAFT finished 71/2 lengths seventh and CLASSY PROSPECT was almost heads on in eighth place.

Given the longer distance, both have been programmed with this race in mind and are expected to run well.

Lawrence Freemantle's MILITARY MOVE, who beat one of his opponents, RAGING PROSPECT, quite easily when they last met, over 1820 metres, on May 8, reports in fine fettle and should help to complicate matters further with Hall of Fame jockey Winston 'Fanna' Griffiths sticking with the ride.

The one I like best, however, is UNCLE TAF, to be ridden by Shane Ellis for trainer Solomon Sharpe.

The four-year-old gelding, who won the Lotto Classic (Governor's Cup) last year and was second to PERFECT NEIGHBOUR in the Derby, has the credentials to topple this field and, coming back well drawn on the outside and working well, should impact the outcome with 52.5kg.

UNCLE TAF ran well in defeat when finishing fourth to 2013 Gold Cup winner, COMMANDING CHIEF, in the Sam Mahfood Memorial Cup, over 1400 metres, on April 26, after racing prominently to turn for home second.

The form of that race has been working out beautifully with runner-up TRADITIONAL PRINCE coming back to win, so too third horse TYPEWRITER, who was just ahead of UNCLE TAF in the Sam Mahfood Memorial.

This speaks volumes for the chances of a fit UNCLE TAF, who could be a better horse this year, having won two of his last three races.

Elsewhere on the nine-race programme, EL PATRON, who has been showing consistent form, should win the knotty-looking Dr David 'Jack' Radix Memorial Cup, for $180,000 claimers, over 1820 metres.

Unbeaten MARLEY'S GLORY is fancied to complete the hat-trick in the first race; STREET DANCER (working well) in the second. Take COLD GROUND to romp the third and Philip Feanny-trained three-year-old RUMBLE to make a winning debut in the seventh for maiden three-year-old fillies.