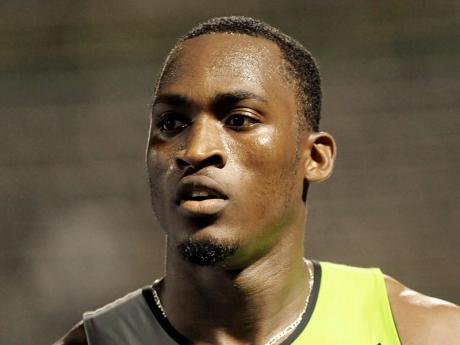 Parchment, who turned 24 yesterday, lost the race and world-leading time to Martinot-Lagarde when they raced in Eugene, Oregon, in late May. He was suffering from the flu then. But yesterday, the tall Jamaican, now healthier, struck back to claim the sprint hurdles in 13.18 seconds, well ahead of Martinot-Largarde, 13.28, and Chinese sensation Xie Wenjun, 13.37. Andrew Riley was fourth in 13.39.

Wilson scored a relatively easy win over Ristananna Tracey in the 400-metre hurdles. Wilson, who will face Tracey again at the end of the month at the National Championships, clocked 55.22 seconds, while Tracey was next in 55.43. Nigeria's Kemi Adekoya was third in 55.49.

In the absence of Usain Bolt, American Justin Gatlin has ruled the roost in the blue riband event of track and field. Coming into the meet, the 2013 World Championship silver medallist had the top-three fastest times in the world this year with marks of 9.86, 9.87, and 9.91. Now, he has the top four times after registering a fast 9.87 seconds. Mike Rodgers (10.08) came through for second after he caught Kim Collins (10.12) late to make it an American quinela.

LaShawn Merritt has lost only twice this season - in Jamaica and in Eugene - where he was denied by Kirani James as both men ran 43.97 to share the world lead. In Ostrava, he was under no such threat as he eased to a new meet record, 44.16, finishing well ahead of Botswana's Isaac Makwala, 44.83, and Great Britain's Martin Rooney, 45.03.

In the field events, Bohdan Bondarenko followed up his impressive win in New York over the weekend with a 2.33 metres win in the high jump. Adonious Mastoras of Greece settled for second at 2.30 metres, while Bondarenko's countryman, Andriy Protsenko, who was involved in the incredible jump-off last Saturday, could only muster a best jump of 2.26 metres for third.