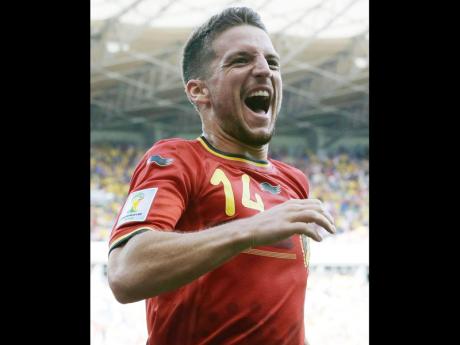 Those who thought the World Cup host or world champion Spain, thumped 5-1 last week by the Netherlands, would walk away with this should think again.

Proving the old adage that there are no easy games in football's showcase, Brazil failed to beat Mexico for the first time at the World Cup, held yesterday to a 0-0 draw in their second game in Group A.

Belgium, a long-shot pick for the title, also struggled to break down Algeria, but got help off their bench to win 2-1 in Belo Horizonte.

In steamy Cuiaba, an evenly matched and entertaining back-and-forth contest ended Russia 1, South Korea 1. Substitutes scored all but one of the five goals on yesterday, proving the importance of having a Plan B.

All 32 teams have now played at least once. The Netherlands and Germany, which scored four Monday against Portugal, are the standouts so far.

If goal scorers struggled yesterday, it was also because goalkeepers had a good day. Before Tuesday, the first 14 matches saw an average of more than 3 goals per game ,bettering the rate of all World Cups since Brazil's first victory in 1958.

But that dipped to 2.9 goals per game following Tuesday's three matches. Ochoa's seven saves in the tournament ,six of them against Brazil , are the most by any goalie so far.

He got an outstretched hand to Neymar's superb first-half header. After another spectacular two-handed reflex save in the second half, batting away Thiago Silva's header, Ochoa high-fived a teammate.

Despite letting in two, Rais Mbolhi was impressive for Algeria, making six saves that put him just behind Ochoa. For Russia, Igor Akinfeev frustrated South Korea's long-range attempts until the power of a 25-yard shot from substitute Lee Keunho seemed to surprise him and bounced out of his hands into the net.

Aleksandr Kerzhakov equaled up the score for Russia just three minutes after coach Fabio Capello put him in.

Belgium looked anything but frightening in a first half where Algeria was more watchable than its brief appearance in 2010. Algeria moved and kept the ball well, looked to hit Belgium on the counterattack and took the lead from a penalty.

Credit Belgium coach Marc Wilmots for turning things around. His second-half substitutions pushed aside the bus , two banks of four players , that Algeria had parked in front of goal.

Dries Mertens and Divock Origi came off the bench to inject much-needed speed and ideas. Wilmots' other substitution, Marouane Fellaini, played better Tuesday than for Manchester United this season, planting himself in Algeria's box.

He headed in Kevin De Bruyne's fizzing cross and equalised in the 70th minute. Mertens curled in the winner 10 minutes later.

"We made one error and we paid for it," said Wilmots. "The bench made the difference. We showed mental strength and we came back."