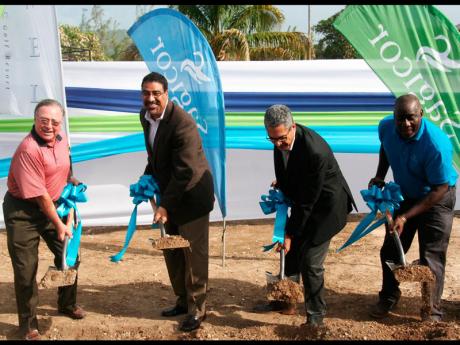 The hotel is targeted at families.

"When we spend this US$5 million on the water park, Sagicor would have invested US$60 million in the tourism business in the last 24 months - J$6.6 billion would have been invested," said Sagicor Group president and CEO, Richard Byles.

Byles said the Sagicor Group now has a total of 741 hotel rooms in Jamaica, having acquired Jewel Runaway Bay 24 months ago, Jewel Paradise Cove just over a year ago, as well as properties within the Dunn's River area.

"It (tourism investments) has done very well for us, especially over the last year, as the hotels have matured, our occupancies have risen, and our room rates have risen, and that is really very important," said Byles. "Because although we like to have high occupancies, what we like even more is strong room rates. And to get those room rates, we now have to invest."

The new water park is scheduled to open in time for the 2014-15 winter tourist season. The high tourist season kicks off annually on December 15.

The water park will include family raft rides, private cabanas and waterfall coves with a raindrop umbrella feature, beach entrance with in-floor shooting geysers and a waterslide splash-down pool.

Guests to the facility will also have access to an oceanfront sundeck measuring 5,000 square feet, a raised entertainment stage for live music, a full-service dining plaza, bar and grill, as well as private club locker rooms with showers.

The water park will be open to Jewel Runaway Bay guests and the general public. It will also be marketed as a venue for private functions and events.