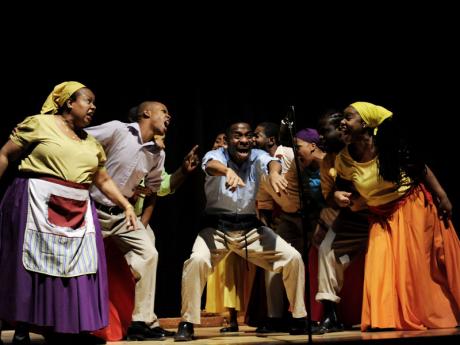 The acclaimed Braata Folk Singers of New York will mark its fifth anniversary celebrations with the 2014 concert production A Likkle Braata ... Goes A Long Way.

There will be two performances of the show, one on Saturday at 8 p.m. at the Jamaica Performing Arts Center, 153-10 Jamaica Avenue in Queens, and the other on the following day at 6:30 p.m. at The Kumble Theater at Long Island University, 1 University Plaza, Flatbush Avenue, Brooklyn.

The group was founded in June of 2009 by its artistic director, award-winning Jamaican actor, vocalist and producer Andrew Clarke, to celebrate and preserve Jamaican and Caribbean culture through the performance of the region's folk music.

And as a celebration befitting this milestone year in the group's journey, A Likkle Braata will showcase remounted and restaged performances of some of the group's most popular items as well as exciting new additions to the company's repertoire.

Returning favourites such as Ole Maas Charley, Dis Long Time Gyal, Sammy Dead and Yellow Yam will take their place alongside premiere stagings of Nah Gi Up and Wheel O Matilda, among others.

Clarke is proud and amazed that five years have passed from the beginnings of Braata to what he now calls "the most significant and inspired Braata production we have done to date".

"As an artistic entity, you usually chronicle your development in five-year increments, and, incredibly, we are already at our first," said Clarke.

"The story within the show we have created this year is, in many ways, the story of Braata. The challenges faced by Miss Matilda, Maas Charley and the villagers - big dreams, hard times, little money - have been ours as well. But like those villagers, we have used the music as the unifying force that has helped us stay true to ourselves and our goals, no matter the obstacle. It has kept the group going forward, onward, upward."

Clarke is again joined by a respected and highly accomplished creative team, including award-winning playwright Karl O'Brian Williams, in charge of script and staging, and renowned choreographer and actor Jermaine Rowe, responsible for movement.