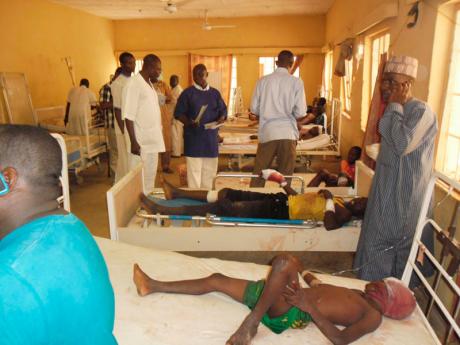 An explosion at an illegal World Cup viewing site in northeast Nigeria killed at least 14 people while security forces arrested a "terror kingpin" among nearly 500 people detained as suspected terrorists in the southeast of the country, police said yesterday.

At least 26 people were wounded in Tuesday night's blast as soccer fans were viewing the Brazil-Mexico match in Damaturu, the capital of Yobe state, police said.

"The bomb just threw me away and I didn't even know where I was," survivor Babagana Mohammed said. He recovered consciousness in the hospital.

Another wounded victim, Musa Mohammed, said some people lost limbs in the blast. He said he had stopped by to buy airtime for his cell phone. "I stopped at the viewing centre to buy a recharge card and suddenly the blast went off. It was just like a flash of light and many people were killed. Some were amputated ... but thank God, mine was a lesser injury."

Witnesses said a suicide bomber drove a tricycle taxi packed with explosives into the area. But Police Assistant Superintendent Nathan Cheghan said the explosion came from a car parked and abandoned on the road in front.

Cheghan said such viewing sites were banned in Yobe state two months ago because they have become a target of Boko Haram, an armed Islamic group that wants to turn Nigeria into an Islamic state.

There was no immediate claim of responsibility, but he blamed Boko Haram.

Security experts have warned that Islamic militants might attack crowds watching the World Cup in public places in Nigeria, Kenya and Uganda, as they did in 2010 in Uganda. The explosions in Kampala, Uganda, at two sites where people watched the 2010 World Cup final on TV, killed 74 people. Al-Shabab, a Somali insurgent group, set off those bombs.

Meanwhile, the Ministry of Defence said it has detained "a terror kingpin in the list of wanted terrorists".

A statement Tuesday night said he was found among 486 suspects arrested while travelling at night in a suspicious convoy of 33 buses in southeast Enugu state.