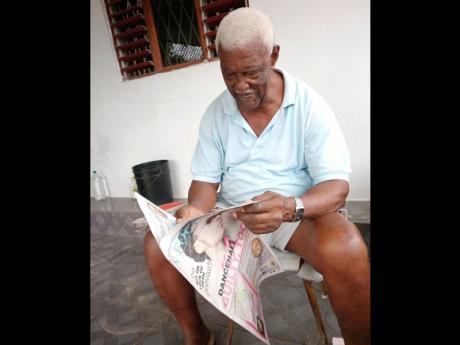 WHEN LINTOIN Robinson was promoted to the rank of inspector of police in 1977, he was supplied with a copy of The Gleaner daily.

"Since I was being given free copies of The Gleaner daily, I thought I might as well make use of it, and I have been reading ever since."

Robinson, who is now retired, still reads The Gleaner at his own expense.

"I became so interested in it that upon retiring in 1991, I continued taking The Daily Gleaner at my expense, and then I added The Sunday Gleaner.

Robinson says he appreciates the wealth of information The Gleaner provides, especially on current affairs both locally and internationally.

"It keeps me up to date with what is going on locally and abroad, so much so that I've developed a type of love for The Gleaner that any time I don't see a Gleaner, I don't feel at home. I just love to read The Gleaner," he said.

Although he now suffers from complications with his sight, Robinson still tries to read the paper.

"I don't read that often now, but at least three or four days a week, I still buy The Gleaner. I always read the sports page and the front section of The Gleaner," he said.

"On Sundays, I must read In Focus because those articles are written by 'big boys' such as Dr (Orville) Taylor and Mr (Gordon) Robinson and you get some very good articles from these columnists, and I really enjoy reading them."

Robinson added: "As long as I am able to read, I will always contribute to the sale of The Gleaner because I must read The Gleaner. The Gleaner has undoubtedly been the best and most stable newspaper over the years."