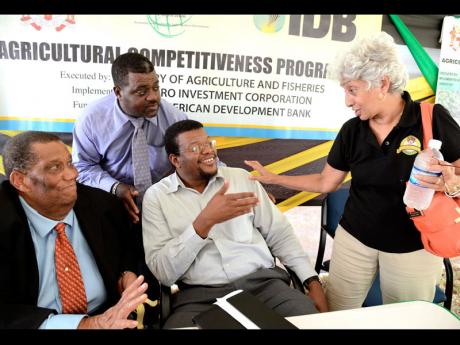 Rita Hilton (right), managing director of Carita Jamaica, in discussion with (from left) Roger Clarke, minister of agriculture and fisheries; Conrad Murray of New Forrest Duff House, and Derrick Deslandes, during the signing of the contract for Inter-American Development Bank-funded infrastructure projects for agro parks and the launch of the Export Market Platform at the Ministry of Agriculture and Fisheries, Hope Gardens, St Andrew, on Tuesday. - Rudolph Brown/Photographer

IN KEEPING with the International Monetary Fund 2015 deadline for the development of nine agro parks, the Government on Tuesday announced plans to fast-track this initiative by reallocating funds from the Agricultural Competitiveness Programme (ACP) to support infrastructural improvements at four agro parks.

Five contracts with a combined value of more than $501 million were signed at the Ministry of Agriculture, Hope Gardens, in St Andrew, to complete the installation of irrigation, drains, roadways and packing houses at agro parks at Spring Plain/Ebony Park in Clarendon, New Forest/Duff House on the border of Manchester and St Elizabeth, as well as Yallahs in St Thomas.

Cabinet on Monday approved $72 million for another contract and is committing some $133 million for the Hill Run agro park in St Catherine.

The Inter-American Development Bank (IDB) in November 2010 approved the ACP for US$15 million to finance priority areas in the agricultural sector in order to increase productivity and competitiveness among small farmers which will be implemented over three phases. It will be funded by the IDB, implemented by Agro-Investment Corporation, and executed by the agriculture ministry.

Graham Williams, financial management specialist with the IDB, used the occasion to explain how the multi-dimensional project will finance activities across three components - market access and market linkages development, food quality and safety management systems, and agribusiness value change development. It is projected that, when fully operational, these four agro parks will help to stabilise the agricultural supply chain, increase exports, and put underutilised rural land into supply, while providing employment in the communities where they are located.

"We are proud to be part of this signing ceremony today, that will commit approximately 35 per cent of the programme's remaining balance to the infrastructure development of these agro parks," Williams said at the signing ceremony.

"Through these contracts, access road network will be constructed, allowing farmers to significantly reduce the cost and time to transport agricultural products from farm to market, packing facility will be constructed in New Forest/Duff House to improve value added and storage techniques to better mitigate and plan against market fluctuation," the IDB representative explained.

In addition, storm water channels will be constructed to reduce the risk of flooding, and irrigation infrastructure will be developed at Ebony Park/ Spring Plain to guarantee that farmers will have access to reliable water supply throughout the year, thereby ensuring sustainability and consistency of crop yields.