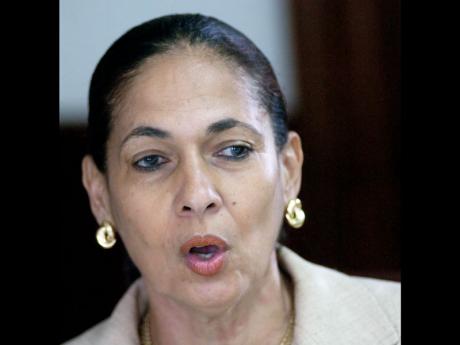 HEAD OF the Constituency Development Fund (CDF) Unit, Moveta Munroe, is lamenting the lack of capital projects being done with monies provided under the fund, warning that it is heading in the direction where welfare and social housing is consuming increasing portions.

"If you look at the programme and you look at welfare, there is nothing in many constituencies that you can turn back and say over three years, we have spent $45 million, and you can't see a stump standing up and say this represents CDF," Munroe said during a CDF meeting at Gordon House on Tuesday.

Up to 33.3 per cent of the $15 million now allocated to members of parliament (MPs) under the CDF can be used for social housing and welfare. The parliamentary committee, which has responsibility for project approval under the CDF, voted for the allocation to each area to be increased to $2.5 million each year, making a total of $5 million available for spending on such programmes.

The decision of the CDF committee means that 16.6 per cent of the fund is now to be used on each area, up from the five per cent set when the CDF came into being.

The level of the increase, however, was below the threshold members Shahine Robinson and Everald Warmington wanted. Both argued that up to $6 million should be set aside for the programmes.

The CDF came into being in 2008 and represents a manifesto commitment of the Bruce Golding-led Government which won state power in 2007. When the fund came into existence, each MP was allocated $40 million to spend on projects in their constituencies.

At the time, a cap of $2 million each was dedicated to welfare and social housing. However, following fiscal adjustments, the CDF was reduced to $20 million and the amount for the welfare programmes was cut to $1 million apiece. With the CDF further reduced to $15 million, some MPs have called for an increase in the cap for welfare and social housing.

"Up to when it was at $20 million, people were still doing things of substance. We are running a programme now, and at the end of the day, when you look back at it, we have nothing to show," Munroe said.

Mikael Phillips, who chaired the meeting, was strident, saying while MPs must be accountable to their constituents, "at the end of the day, you can't have the bulk of the [funds] going to welfare and social housing".

Robinson, who represents North East St Ann, said at least $3 million should be allocated to each area. She said given the areas on which the CDF has to be spent, such as economic enablement, disaster mitigation, sports development and education, it is almost impossible to do capital projects.

"All of those are social-intervention programmes, and one thing it is speaking to is that in the same way the CDF declined to $15 million, people's abilities to deal with their own welfare have declined too," Robinson argued.

She noted that each constituency has its own peculiarities which must be taken into account when setting the new guideline.