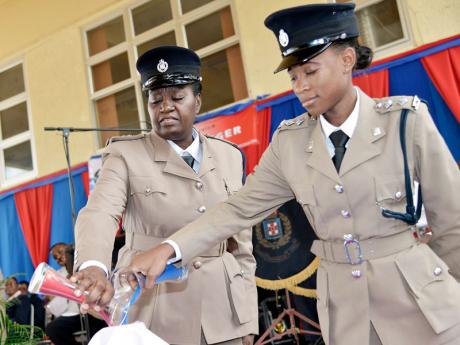 Eulette Gaynor (left), deputy superintendent of police, and Sherika Service, assistant superintendent of police, engage in a symbolic sand ceremony signifying the joining of the Jamaica Constabulary Force and the Island Special Constabulary Force during a dedicatory service for the merger held on Sunday at the Jamaica Police Academy, St Catherine. - Norman Grindley/Chief Photographer

The service was held under the theme, 'Celebrating the Police Family: United in Moving Forward'.

A presentation was also made to the eldest past member of the ISCF, 91-year-old Sineon Shepherd.

Also in attendance were Governor General Sir Patrick Allen, Director of Public Prosecutions Paula Llewellyn, and other senior members of the JCF.

In his remarks, Commissioner of Police Owen Ellington said: "Today marks the embracing of one doctrine regarding what was previously two organisations. This one doctrine defines who we are, a body of men and women who are committed to service of our fellow citizens."

Guest speaker Dr Herbert Thompson charged members of the force to strive to be professionals. "When a uniformed officer walks on to a street corner or steps out of a building, it must say something. Those of us who look at you must see and feel assured that someone is here to solve the problem."

The ceremony closed with a parade where members of the force laid down their arms in a formation spelling out 'We Are One', truly symbolising the merger of the two forces.