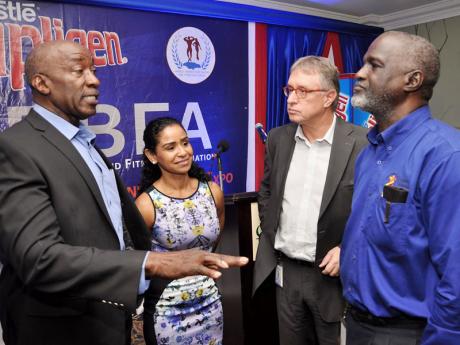 With an increase in the number of participants in this year's staging of the Supligen/Jamaica Amateur Body Building Fitness Association (JABBFA) Championship, Sydney Davis, president of the association, is expecting a competitive tournament.

A vastly improved 84 entries from 26 gyms have been entered for the championship, which will be held over two days - for the first time at the Holy Childhood High School Auditorium - from July 4-5. The number of entrants is significantly higher than the 38 from last year.

Two new categories will be introduced, men's and women's physique.

Prejudging of the championship will take place starting at 6:30 p.m. on the first day and the finals will begin at the same time on the second day. Participants will be competing for over $300,000 in prize money.

"This year is not only going to be very exciting, but it is going to be a much bigger championship," said Davis, during yesterday's press launch at the Courtleigh Hotel in Kingston.

"It is going to be much more competitive because we have many more athletes and that is going to spark a lot of interest in the audience," he said.

"It is going to be very competitive among the participants because this is the first time that we will be able to bring on stage at the finals just the top six.

"Last year, everybody went into the finals, but this year, we will be choosing just the top six and that is why we are looking forward to very keen competition," added Davis.

Casey Perue, senior consumer marketing manager of sponsor Dairy Nestle Jamaica, said his company is committed to the development of the sport.

"It perfectly aligns with us in terms of spreading the word about the importance about living a healthy lifestyle and about nutrition, health and wellness," said Perue.

"Supligen is a product that is designed for people who are busy, active and people who really care about living a healthy lifestyle and how they look, and so Supligen is a perfect fit for this championship," he said.

URGED TO DO THEIR BEST

Denzil Wilks, general manager of the Sports Development Foundation and guest speaker at the launch, urged participants to do their best.

"The SDF fully endorses this event and wishes for the JABBFA a most successful staging," he said. "We also wish to see the organisation continue on its growth trajectory and that the athletes will bring glory to Jamaica at the regional and international tournaments in which they participate," said Wilks.

"We are aware of the dedication and discipline that it takes to get to that level. We salute this kind of commitment and see it in the same vein as a Usain Bolt blazing down the track," said Wilks.