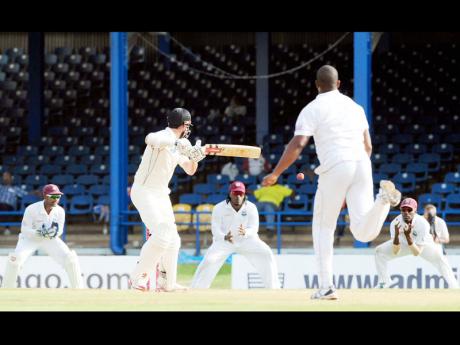 New Zealand batsman Mark Craig (second left) edges the ball to be caught by Darren Bravo (right) in the slips, off the bowling of Shannon Gabriel (back to camera), during the second Test cricket match against the West Indies at Queen's Park Oval yesterday. Looking on is wicketkeeper Denesh Ramdin (left) and Chris Gayle (centre). - photos by Dellmar 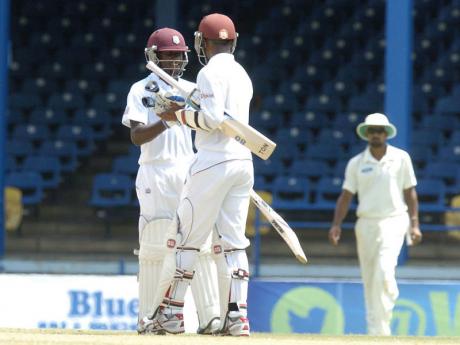 Jermaine Blackwood is congratulated by skipper Denesh Ramdin (back to camera) upon reaching his half century, during the Test match against New Zealand at Queen's Park Oval, Trinidad, yesterday.
1
2

Rookie Jermaine Blackwood struck a half century on debut while veteran left-hander Shiv Chanderpaul achieved another personal milestone, as West Indies batted themselves into a commanding position on the third day of the second Test against New Zealand here yesterday.

Jamaican Blackwood stroked an attractive 63 and Chanderpaul, 47, two innings that allowed West Indies to pile up 460 all out in response to the Black Caps' 221, and take a lead of 239 runs on first innings.

At the close at Queen's Park Oval, however, New Zealand were making a fist of it at 73 for one, requiring a further 166 runs to make the hosts bat again.

At the forefront of the battle were the unflappable pair of Kane Williamson, unbeaten on 38, and left-handed opener Tom Latham who was 30 not out.

Blackwood anchored two partnerships, adding 47 with Chanderpaul for the seventh wicket before putting on a further 76 with captain Denesh Ramdin (32) for the eighth, as the Windies pressed home their advantage.

In the process, Chanderpaul moved into seventh spot on the all-time list of run-scorers in Tests, surpassing Sri Lankan stroke-maker Kumar Sangakkara.

On four not out overnight, Chanderpaul started positively with a cover drive for four off Boult in the day's fourth over before pulling the first ball of off-spinner Mark Craig's opening spell to the square boundary.

He cleared long on with Craig for his only six and when he reached 32 with a single to the deep in the bowler's next over, he overtook Sangakkara in seventh spot on the all-time list.

Chanderpaul took two successive fours off leg-spinner Ish Sodhi before falling lbw on review to the same bowler, in the fourth over before lunch. He faced 93 balls in 158 minutes, and struck five fours and a six.

Blackwood, meanwhile, played with the same freedom that has characterised his excellent form in recent weeks, crunching six fours and two sixes, in an innings spanning 146 minutes and 110 deliveries.

The right-hander got off the mark with a streaky boundary through slip off Boult, but then lofted the bowler effortlessly over long on for six, a few balls later in the same over.

Dropped on 11 at short leg by Latham off Craig, Blackwood pressed on unperturbed, nailing one from Sodhi over long off as lunch approached.

Resuming on 31 at lunch with West Indies on 396 for seven, Blackwood made the most of a reprieve when he reached 34, in the fourth over on resumption. He missed a pull at slow bowler Williamson, and was adjudged lbw. However, he reviewed the decision and replays showed the ball was missing the stumps.

Blackwood raised his half century with a single through square on the on-side off Williamson, but eventually perished when he nicked Sodhi to Ross Taylor at slip.