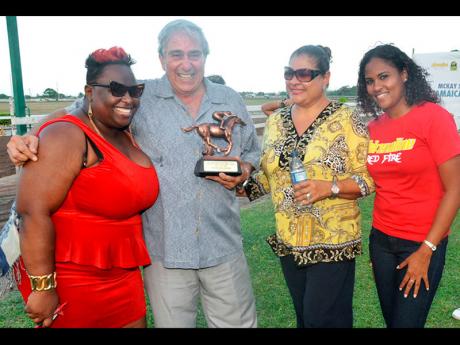 His other winner was 9-5 favourite WINESHA in the closing straight-five race, confined to four-year-olds-and-up fillies and mares (non-winners of two).

The much improved 4-y-o filly FANTABULOUS, running a odds of 6-1 with Paul 'Country' Francis aboard, romped home by 31/4 lengths from the late-running HOVER CRAFT (10-1) in the open allowance race over 1500 metres contested by six starters.

She raced close up from early as highly fancied CLASSY PROSPECT (5-2) jostled for the lead with RAGING PROSPECT (5-2) on the inside before going through at the half mile. She turned for home some two lengths clear of CLASSY PROSPECT and quickly put the issue beyond doubt with an easy win.War Marshall out of Lady Indira, FANTABULOUS is owned by O'Shaun Connection and bred by Henry Jaghai. This was her third win from her last four starts and her sixth from 20 starts lifetime.

Later in the afternoon, ROYAL LINE (4-1) was sent through by the apprentice Jemar Jackson approaching the half mile in the Dr David 'Jack' Radix Memorial Cup ($180,000 claiming) over 1820 metres and after turning for home a clear leader, cruised home by 41/2 lengths from NATURALFANTASY (9-1) and 2-1 favourite EL PATRON in a field of 11.

Darby, son of veteran trainer Robert Darby, pushed his season's tally to 24 with his latest windfall and $10 million in stakes to hold down fourth position in the standings. Only champion and leading trainer Wayne DaCosta with 34 winners has saddled more winners than Darby so far his season.

Champion jockey Dane Nelson, who moved to 48 at the top of the standings, rode two winners in WINESHA and 9-5 favourite TRICKY NICKY to emerge leading rider on a day when the fancied horses fell like nine pins. They include odds-on favourites MARLEY'S GLORY, COLD GROUND and the debutante RUMBLE, who showed little as the howling 2-5 favourite in the seventh race for maiden three-year-old fillies, won in fine style by ETERNAL JOY (6-1) with Jevanne Erwin riding for trainer Anthony 'Baba' Nunes.