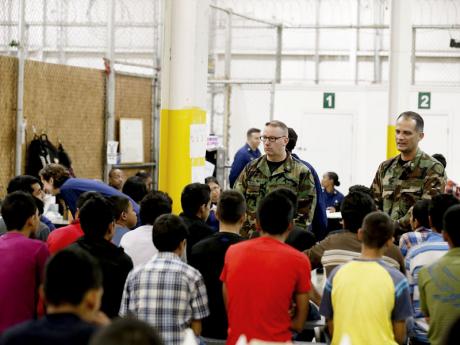 Boys await medical appointments in a holding area where hundreds of mostly Central American immigrant children are being processed and held at the US Customs and Border Protection Nogales Placement Center.

Children's faces pressed against glass. Hundreds of young boys and girls covered with aluminum-foil-like blankets next to chain link fences topped with barbed wire. The pungent odour that comes with keeping people in close quarters.

These were the scenes Wednesday from tours of crowded Border Patrol stations in South Texas and Arizona, where thousands of immigrants are being held before they are transferred to other shelters around the country.

It was the first time the media was given access to the facilities since President Barack Obama called the more than 47,000 unaccompanied children who have entered the country illegally this budget year an "urgent humanitarian situation."

The surge in minors, mostly from Central America, has overwhelmed the US government. It also prompted Texas officials Wednesday night to order a surge in state law-enforcement resources to the border in an effort to help stop the influx. Details of that surge are still to come.

The children pose a particular challenge because the law requires that they be transferred from Border Patrol stations like the ones in Texas and Arizona to the Department of Health and Human Services, within 72 hours.

From there, they are sent to shelters for several weeks as the government tries to reunite them with family in the US. The network of some 100 shelters around the country has been over capacity for months and is now caring for more than 7,600 children.