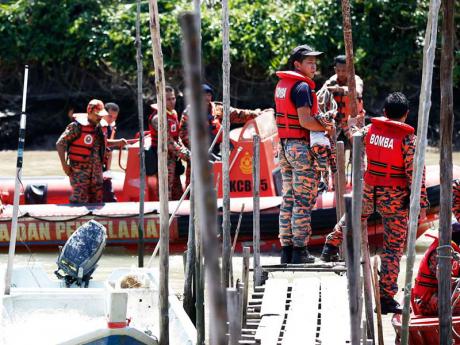 Malaysian search and rescue personnel return to a port following their search operation for passengers of a sunken boat on the outskirts of Banting, Malaysia, yesterday.

Federal research shows that the number of babies born in Massachusetts with heroin and other opioids in their system is much higher than the national average.

The Boston Globe reports that more than 1,300 Massachusetts babies, or about 17.5 per 1,000 hospital births, were born with narcotics in their system in 2013, more than triple the national rate of five babies out of every 1,000 births.

The federal numbers are also higher than the state's count of 128 babies born with drug dependence in 2013.

Nine people were missing after a boat carrying 27 Indonesian workers overturned yesterday off Malaysia's west coast, the country's maritime agency said, in the second such accident in two days.

Maritime agency official Hamid Mohamad Amin said the second boat capsized early yesterday in rough seas about 12 miles (20 kilometres) off Sepang town on the outskirts of Kuala Lumpur. He said 18 people, including four women, were rescued by passing merchant ships, but nine others were still missing.

One of the survivors was injured seriously and was hospitalised.

Hamid said the small boat was believed to have been headed to Tanjung Balai on Indonesia's Sumatra island to bring the workers back ahead of the Muslim holy month of Ramadan. He said the boat was overcrowded and its capacity was only 10 people.

The European Union's statistical agency says more people were granted asylum across the 28-nation bloc last year, mostly because of a high influx of refugees fleeing the war in Syria.

The biggest group of refugees that were granted asylum was some 36,000 Syrians, a quarter of the total, followed by about 16,000 Afghans and 9,700 Somalis.

Sweden, with 9.6 million inhabitants, was the most generous country in accepting asylum seekers, granting protection to 26,400 people, followed by Germany, the EU's most populous nation, which accepted 26,100 people. France took in 16,200, and Italy 14,500.