Results are in! Emotions run high as GSAT grades are delivered 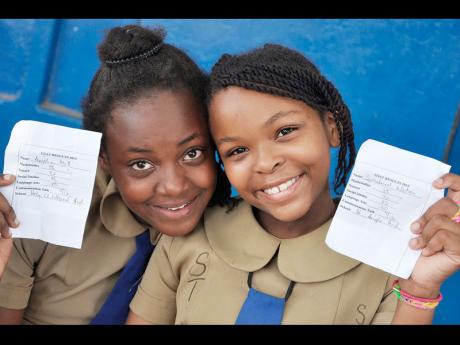 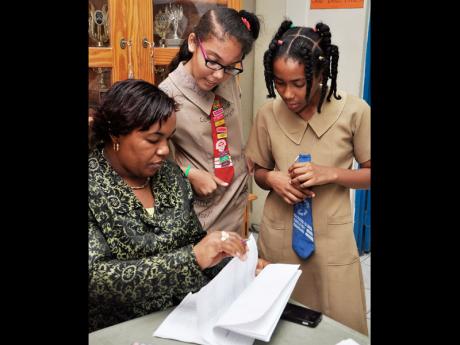 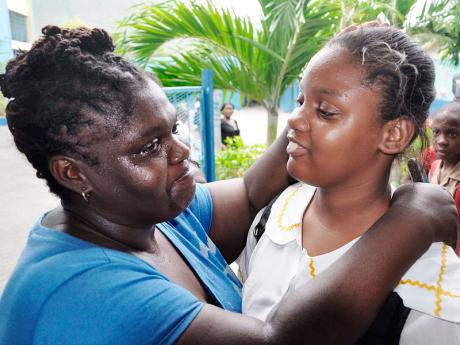 Lisa Melford (left) burst into tears on learning that her daughter, Britaney Melford, of Rollington Town Primary, scored high marks in the GSAT and will be attending Campion College. 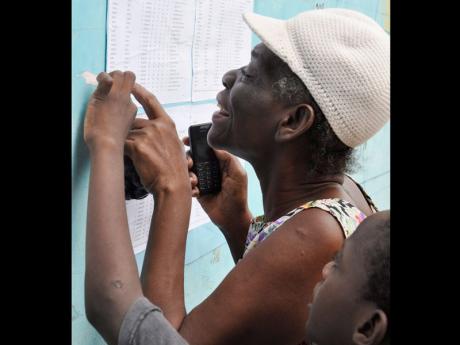 Evelyn Cunningham searches for her granddaughter's name on the GSAT results sheet at the Naggo Head Primary School.
1
2
3
4

The nerve-racking experience the Grade Six Achievement Test (GSAT) has now become for many students was clearly displayed yesterday, as the results of the exams were gradually released to schools.

Bloodshot eyes and tear-streaked faces, sometimes because of jubilation but mostly due to disappointment, were mingled with shouts of elation and hugs from parents in at least two of the institutions The Gleaner visited yesterday evening.

At the Rollington Town Primary School in Kingston, one student was sobbing so uncontrollably that she was unable to say her name.

She, however, stopped howling just long enough to say she was upset because she got into Wolmer's Girls School and not her first choice, Campion College.

Her teachers and friends tried consoling her by telling her Wolmer's was one of the top-performing schools in the island, but that did little to beat back the tears.

Dr Margaret Bailey, principal of the school, explained there were some students who did exceptionally but did not get into their first choice, and this little girl was one of them.

She said she was elated with the overall performance of the students, as their grades reflected the hard work the pupils and the teachers put in.

Sharon Martin-Dale, guidance counsellor at Rollington Town Primary, said she was shocked by some of the placements, but teachers and counsellors just have to encourage all the students and help them to accept the results.

"We have to keep telling them, 'it's not about where you are placed but the work that you do when you get there'," she said, adding that the students at her institution were generally pleased with their placement.

Naggo Head Primary's top student, Julia Dunn, who received a 99 per cent average and will be attending Campion College come September, noted that she was extremely pleased with her results.

She attributed her outstanding performance to her thirst for new knowledge.

"I read a lot and always study from books outside the ones that they give us and (I) practise a lot in my spare time," stated Julia.

Her mother, Shirlene Dunn, said she had always known that her daughter would do well, even though she was a bit nervous after the exams, as she complained that some areas were a bit challenging.

"I told her to just wait for the results and wherever she is placed, just go there and shine," said Dunn.

For Julia's colleague, Brittany Heath, the glee in her placement was not so pervasive.

She said she really wanted to attend St Andrew High School for Girls but was placed at the one-year-old Cedar Grove High, in Portmore, St Catherine, instead.

"I wanted to go to St Andrew High but I have to satisfy (myself) with what I get and work hard," Heath told The Gleaner.

Several of the schools The Gleaner contacted yesterday said they were in the process of collecting and disseminating the results.

The majority of them indicated that the students and parents would more than likely get the results during the course of today.

Education Minister Ronald Thwaites earlier this week said 28,880 of the 39,438 students who sat the exams in March were placed in one of their preferred schools.

He said there was a significant decline in the number of students being placed in all-age and primary and junior high schools, with only 1,002 being placed in these institutions across the island.