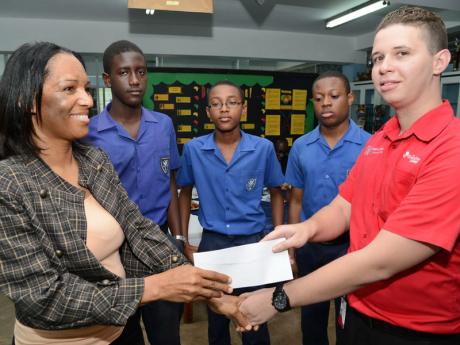 GRACEKENNEDY, FIRST Union Financial and The Gleaner Company on Wednesday partnered with parents to celebrate students who are members of the Jamaica College (JC) Honour Society.

Students in second and third forms, who consistently score more than 80 per cent in all subjects, were fêted at a luncheon at the institution's Old Hope Road campus in St Andrew. They were addressed by the Minister of Education Ronald Thwaites, their principal Senator Ruel Reid, First Union Financial's Daniel Bernard; president of the parent teachers' association Collin Greenland, and parent, Janette Clarke.

The principal told the students that they were extraordinary and urged them to continue to perform well in all subject areas. "You are role models, exemplars of excellence in academics and conduct, you are setting the tone that drives excellence for the rest of the school," he told the boys.

Senator Reid thanked parents and sponsors for making the luncheon possible, arguing that "this is very significant because one of the things we've been doing is to restore JC to its place of being the number-one high school in Jamaica".

The principal urged the boys to continue to act as good role models for their peers, adding that "we will continue to systematically encourage and motivate you to always strive for excellence. You're all extraordinary and because of that we, as educators, also have a responsibility to draw out that talent, nurture it and make sure that you continue to excel". He noted that the institution's aim was to produce well-rounded boys, ready to make meaningful contributions to Jamaica's development.

Thwaites also commended the students and noted how privileged they were to attend JC. "To whom much is given, much is expected, it is very important that you recognise the critical role that you are playing," he said.

"I trust that because you are the ones doing very well, that you will set an example for your classmates to do well, too. The most important thing for you at JC is to become men of strong and good character, men who understand their roles in society and follow the tradition of all the great men who attended this institution before you," added the minister.

Bradley Dodd, a second-form student and member of the Honour Society, highlighted the positive impact that his tenure at the institution has had on his life so far. "Being in the Honour Society has been rough so far because some people can relate to having to study very, very hard and staying up late. It has also been a wonderful experience as we get some privileges. I'm glad that I worked hard to make it to JC and will continue to do my best," he told his colleagues.

Bernard, spoke about his company's commitment to education while parent, Janette Clarke, reflected on her experience at Jamaica College.