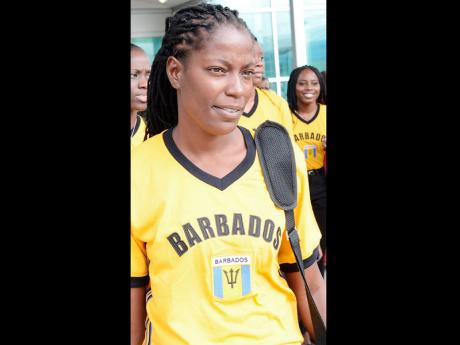 Captain of the Barbadian netball team, Latonia Blackman (front), with members of her squad shortly after they arrived at the Norman Manley International Airport yesterday. - Rudolph Brown/Photographer

Jamaica's Sunshine Girls will face Barbados in the opening match of a three-match friendly series at the G.C. Foster College in St Catherine, starting at 7 p.m.

The second match will be played on Friday and Saturday, respectively, at the same venue at 5 p.m. on both days. The teams are using the series as part of their preparations for next month's Commonwealth Games, which will be held in Glasgow, Scotland, from July 23 to August 3.

Jill McIntosh, technical director of the Sunshine Girls, said the players must prove themselves in the series in order to be selected for the Commonwealth Games.

"This series will give all 17 players in the national squad a chance to show the selectors what they can do, and as selectors, we are looking for combinations of the players," said McIntosh.

"It will be a good series of friendly matches," she said. "We never underestimate any opponent because, with the proper conditions, it will be a proper match and so the Sunshine Girls will have to step up and play their best," McIntosh said.

The Barbados contingent arrived in the island yesterday and their head coach Anna Shepherd said she is expecting a good performance from her team.

"We are definitely expecting a tough series because the games are played on the court and not in the boardroom, and we come here to play our best netball," said Shepherd following her team's arrival at the Norman Manley International Airport yesterday.

"We are not scared, but I guess the excitement is there, and so I am confident that we can give a good showing, because we always play well against Jamaica," she added.