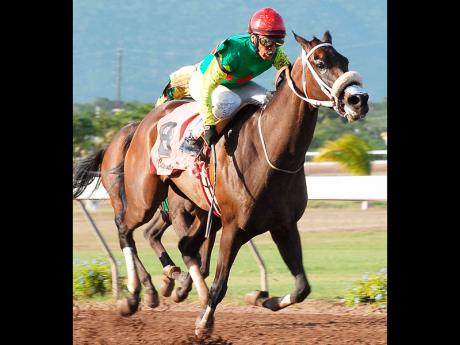 Thanks to mild upsets by FANTABULOUS and ETERNAL JOY, both at odds of 6-1, the Pick-9 proved elusive at Caymanas Park on Wednesday, but the jackpot still stands at $1 million.

Both Super-6s, however, were caught. In-form trainer Ryan Darby impacted on the late Super-6 with three winners - FANTABULOUS in the sixth race, ROYAL LINE at 4-1 and WINESHA a 9-5 favourite in the closing race.

We look at the first Super-6 which commences with a 4-y-o and up restricted allowance race (non winners of two) to be contested by six starters over a mile. From all indications, the race should come down to a straight fight between ELUSIVE DREAM and the recent winner SEQUOYAH, to be ridden by Shamaree Muir and apprentice Orlando Foster, respectively.

The Margaret Parchment-trained SEQUOYAH was finally rewarded for her consistency with an easy win over the distance in maiden company on June 7 and although that race was run in a slow time, the bay gelding could bring fitness into play and win again.

Preference, however, is for ELUSIVE DREAM, who chased home the then unbeaten MARLEY'S GLORY at a respectable distance over 1400 metres on June 2.

The second race for overnight allowance horses again over a mile should be won by EXOTIC GOLD, who won the Oaks as a three-year-old in 2012.

The five-year-old mare could only manage eighth place in her recent race behind LADY LIKE over the straight, but the trip was unsuitable and now venturing over the ideal trip, will be hard to beat based on her close third to POTCHEEN and BLAST THEM AWAY in the grade one Eros Trophy over 1400 metres on March 29. Having impressed at exercise in preparation for this race, EXOTIC GOLD with only 52.0kg and stable jockey Dick Cardenas aboard, should be used as a banker in the 10-strong field.

Recent winner EL CLIENTE with Rayan 'Chin' Wilson riding for trainer Gordon Lewis, ran on strongly to win over a trip short of his best (1100 metres) on May 31, should gets the better of the recent winner LADY ABHIJITA and MR. LUVAL in the third race over 1400 metres in which seven will run.

EL CLIENTE will be more at home over this trip, having failed by half a length to catch ASIA'S DREAM (who reopposes) over same and now that much fitter, should stave off the DaCosta-trained MR LUVAL with Cardenas aboard.

Next is a three-year-old maiden condition race over 1200 metres in which IT'S MY BIRTHDAY, CONCUR and, SUB STRUCTURE and JUNIOR DON in contention at the end.

IT'S MY BIRTHDAY, with Jevanne Erwin riding for trainer Neive Graham, caught the eye when finishing a good third to HERECOMESTHEJUDGE and XQUISITE CHOICE over 1400 metres last Saturday, will welcome the shorter distance (1200 metres) of the fourth race for maiden three-year-olds and gets the nod over CONCUR, who reports in good nick.

The fifth, for native bred three-year-olds over the straight five course, should resolve itself into a straight fight between the much improved MANDEYA (Dane Nelson up) and the luckless DAGGA DAGGA LINKS with Shane Ellis aboard. DAGGA DAGGA LINKS has been disqualified twice after winning over the straight this season and despite managing only eighth behind THIS IS IT over the course on June 7 when slowly into stride, can rebound. However, MANDEYA, who went down fighting at odds of 99-1 to LUCKY MICHELLE over 1300 metres last Saturday, is so well within himself at present that he is given the edge.

Then, take the recent winner INSANE BOLT, Cardenas riding for DaCosta, to follow up on a $250,000 claiming tag on the sixth race over 1200 metres.