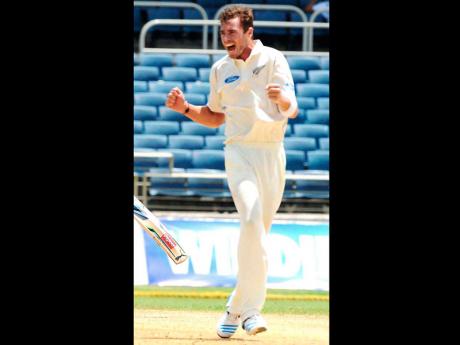 Southee was reported to match referee Chris Broad following the incident on Tuesday's second day during the early stages of the West Indies innings.

"Southee's behaviour towards Edwards was unacceptable and contrary to the spirit of the game. He disregarded the on-field umpires' previous warnings and continued to engage with Edwards, which required the intervention of the umpires in the middle of the pitch," said Broad.

"In doing so, Southee neither showed respect to his opponent nor to the umpires, something which has no place in our sport."

Southee pleaded guilty to the charge of 'conduct contrary to the spirit of the game', which was a Level One breach of the ICC's Code of Conduct.

India won the series against Bangladesh 2-0 after their third and final one-day international was abandoned due to heavy rain yesterday.

India were 119-9 in 34.2 overs before the third spell of rain forced umpires to call off the match.

Cheteshwar Pujara was the top scorer with 27 while Stuart Binny was 25 not out. Suresh Raina also made 25.

India won the toss and batted despite the overcast conditions suiting seam bowlers, and Bangladesh's pacemen made regular inroads.