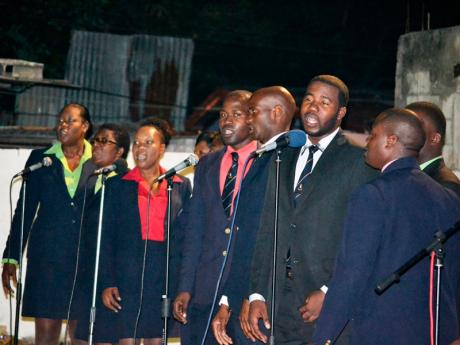 The Jamaica Constabulary Force (JCF) Choir is to perform at the 'Rejoice in the Lord Ministry' Church on Gillian Road, Apopka, Florida, beginning Monday. The series of performances ends July 1.

The JCF Choir's month of celebration is being sponsored by the Apostolic Church of Jesus in Ocoee, Florida.

Past Woman Constable Jacqueline Campbell has served almost 10 years on the JCF Choir and now resides in Florida.

According to Campbell, she, along with her family, extended the invitation to the choir because of the confidence they have in the group.

"They are good - they are excellent - and I don't just want the choir to be in Jamaica. They deserve to be heard internationally," said Campbell.

"With the help of my fiancé and family members, we will be providing everything for the 32 members, including their trip to Disney World," Campbell said.

"It will be a great experience for the choir as this is the first time they will be performing overseas," said Deputy Superintendent Winston Woolcock, managing director of the choir.

"It will not just mean a lot to me, but to Jamaica as well," he said.

Assistant Managing Director of the choir, Inspector Yvonne Roofe, has been a member of the choir for 32 years and said they have been waiting for this moment for a very long time.

"We have got many invitations, but we just got the chance to go, and I am excited," said Roofe.

"Several other churches overseas have requested our presence, but we have been unable to make it, so I suppose we will be making another trip soon," she added.

JCF choir director, District Constable Heston Boothe, has travelled before with other choirs and is aware of the quality required by an international audience. He has promised to give the audience a performance to remember.

"I feel honoured to be the director when the choir is making its first international trip," said Boothe.

He also said the choir would be using the opportunity to launch its first album, Legacy of Faith.

The album has 13 songs, including an original composed by Roofe called Trouble Inna dis Worl'. It was arranged by Roofe and Boothe.

After 12 years of being the director of the JCF Choir, Roofe has seen and had some wonderful experiences and performances and stands confident that the group will do extremely well. She also hopes this will lead to other opportunities.

Public relations officer Corporal Rosemarie Lee Bruce has been dedicating her service to the JCF Choir for more than 10 years.

A passionate lead singer, Lee Bruce said she could say on behalf of the choir that they were all excited.

"We have travelled throughout Jamaica - every nook - from Negril to Morant Point, and that has given us some really good experiences. Now, going international for us means a lot to us in that it opens the doors for new partnerships. Moreover, it serves as motivation and helps to shed the negativity from the Jamaica Constabulary Force," Roofe said.

Lee Bruce pointed out that being on the choir takes commitment and dedication, which is evident in the hectic schedule the group has. The choir recently performed on Television Jamaica's Smile Jamaica, and are booked almost every week.