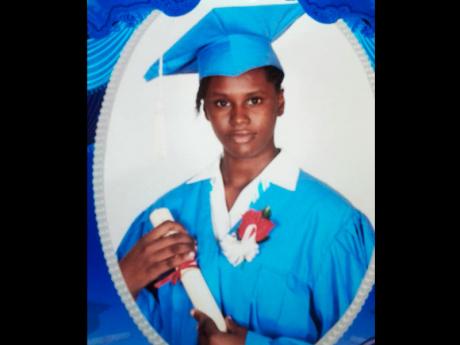 If ambition is the optimum octane that drives one's dream, then poverty is definitely the ultimate force inhibiting the development of Denbigh High scholar Shernette Grandison, whose dream of pursuing a career in archaeology has been frozen indefinitely since her recent diagnosis of acute thoracolumbar scoliosis.

After acing eight subjects in her Caribbean Secondary Examinations Certificate (CSEC), the 18-year-old, who lives in Goshen, Mocho, Clarendon, with parents Wayne, a farmer, and Jacqueline, who sells in May Pen, and two younger siblings, is now battling severe pains and struggling to find almost $600,000 for corrective surgery or live with permanent deformity.

"The pain ... the pain is unbearable, especially at nights. I just sleep for, like, two hours at night and I am up for the rest of the time in pain," lamented Grandison.

"I just want to be able to do the surgery and get rid of this sickness and pain, which have prevented me from doing sixth form at school. I am dying to resume my education, but the money for the surgery is too much for my parents to find at this time," she told Rural Xpress.

The teen said that she began noticing that something was amiss from as early as the eighth grade when she started feeling pain in her lower back and around the waist. She said it made her bag of books harder and harder to carry. She said she dismissed it as general tiredness.

The soft-spoken scoliosis victim said, "As I progressed through high school, so did the severity and intensity of the pain and the misalignment of my spine. In 2011, while I was doing a routine back-to-school medical, a doctor at the Mocho Heath Centre saw that something was wrong and gave me a referral to take to specialists in Mandeville."

Grandison said after three visits to the specialists at the Mandeville Hospital, she was again given a referral to the Kingston Public Hospital, where she was diagnosed with the disease and corrective surgery was recommended.

Mother, Jacqueline, a Holy Ark Apostolic Christian devotee, said that she, too, had been having sleepless nights and had cried a lot over the pain and suffering her first-born endures daily but that her faith in God was nonetheless unwavering.

"We are trying to do what we can, but,honestly, we cannot afford that sort of money. It isn't easy to find almost $600,000 right now, but my God is an awesome God, so I am just praying and appealing to a Good Samaritan to help us out of this dark period in our family," said Jacqueline Grandison, sadly shaking her head.

"She will need 20 screws and two rods for the surgery, and each one of the screws costs $22,000, while a single rod costs $11,000, so that is about $560,000 in all just to purchase the stuff for the surgery. We have saved up a little of the amount ... but are nowhere near the half a million," she pointed out to Rural Express.