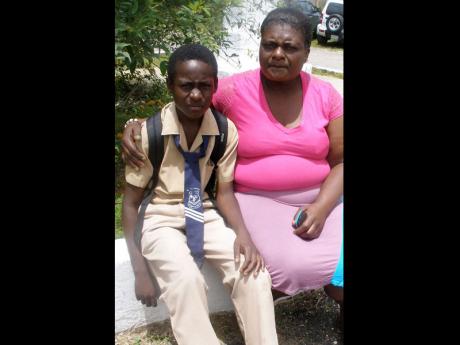 Dave Dunwell, who is in desperate need of financial assistance to do surgery, sits with his mother, Donna Whyte. - Photo by Tamara Bailey

IT WAS a normal night nine years ago when Donna Whyte decided to go to the 'nine night' of a late friend in the community and take her son, Dave Dunwell.

It was there that he met with his friends and started playing games, one of which had him climbing a tree. Shortly afterwards, his mother heard a loud cry, and Dave was found on the ground with a piece of steel piercing his side.

Dave was subsequently rushed to the hospital, where it was revealed that he had damaged his bladder. He has been wearing a catheter since.

She said that the constant pain her son endures is disheartening.

"It hurt me to see him in pain. Man, when the pain tek him, sometime him mess up himself. He'll be good this moment, and then five minutes later, him sick and weak out and in the bed whole day ... . The pressure pon me head fi know say I'm trying all I can and nothing seems to be working. It make me haffi cuss, man because I don't know what else fi do, and I can't afford it."

Whyte, who travels with Dave every two weeks to get his bandages and bag changed, said she wants for her son to live a better life.

"Me in debt right now, and when I think of the future expenses, me heart just sink. It costs $3,000 for fare every time we have to go into Kingston, with an additional $500 for lunch. Dave needs to do some tests, and that is a next $4,000 to $8,000 to think of, plus medication, which can cost up $4,000 fi one, and he did a surgery before, but it didn't work, and now he needs another surgery to correct the problem. The doctor says this surgery is to see if he can urinate without the tube the natural way, and that surgery is going to cost $122,000, and I don't see the first cent ... ," Whyte lamented.

DESIRE TO BE NORMAL

Dave wants to live a normal life and not be reclusive because of his condition.

"I don't really tell anybody that I wear di tube, enuh, cause they don't understand, and I don't want them trouble me ... . I just want a normal life," Dave told Rural Xpress.

With her head down, Whyte said: "I would be so grateful for some help for Dave. Me tired fi see him suffer with this sickness from him a four years old until now. Nothing seems to work so far, but we hopeful that this surgery will work, but we need the help bad, bad, bad. I want him out of the pain, so I'm begging Jamaica, please, to help me.