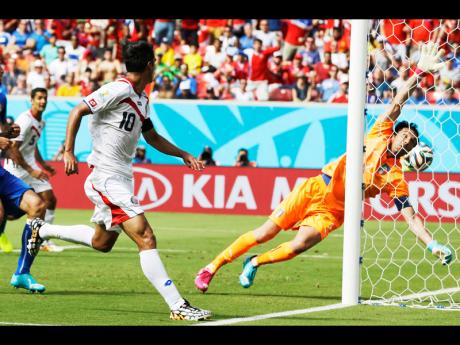 The World Cup of surprises is turning into a sweet samba party for teams from the Americas.

Having already stunned one former world champions, little Costa Rica shocked another yesterday and sent a third one home. Then the French exploded with five goals against their Swiss neighbours.

The story so far: Two European powers - Spain and England - are out of contention after just two games. European teams have played eight teams from the Americas and won just twice. The nine teams from Africa, Asia and Oceania have contrived to win just one game between them.

But for teams from the Americas, their record as of yesterday against nations from other regions: played 12, lost just two. Ole! In short, the new world is embarrassing the old one.

None of the previous seven World Cups in the Americas were won by teams outside Latin America. On current evidence, this one looks increasingly unlikely to be the exception.

Although the score was just 1-0, Costa Rica were easy winners yesterday over four-time champions Italy in the coastal city of Recife. Having also won their first match, 3-1, against two-time winners Uruguay, Costa Rica are now guaranteed a spot in the knockout stage.

Costa Rica's win also killed off England's faint hopes of advancing. Italy and Uruguay will play each other on Tuesday to determine which of them join Costa Rica in advancing from Group D.

The only two European nations to have beaten Americas teams so far in Brazil are France and Switzerland, which overcame Honduras and Ecuador, respectively, in their first Group E matches. Yesterday France and Switzerland played each other in Salvador, also on the coast. The French were rampant winners, 5-2, all but guaranteeing they, too, will advance to the last 16 for only the second time since they won the title in 1998.

If France stay on top of Group E, they will likely face Iran, Nigeria or Bosnia in last 16. They should all be manageable opponents for the talented French who are rebuilding their reputation ruined by a training ground strike by players at the last World Cup. Friday marked the fourth anniversary of that debacle in South Africa.

Attackers Olivier Giroud and Karim Benzema each scored one goal and created another against the Swiss. Benzema went 15 games without scoring for France in 2012-2013. He now has three goals in Brazil.

"Karim is confirming that he's in very, very good form. He's in great shape athletically," said France coach Didier Deschamps. "Having such an efficient player is very important in a competition like this."

Costa Rica's victory over the Italians was no fluke. Italian goalkeeper Gianluigi Buffon made several diving saves. But he couldn't reach Bryan Ruiz's pinpoint header in the 44th minute off Junior Diaz's long, curling cross from the left.